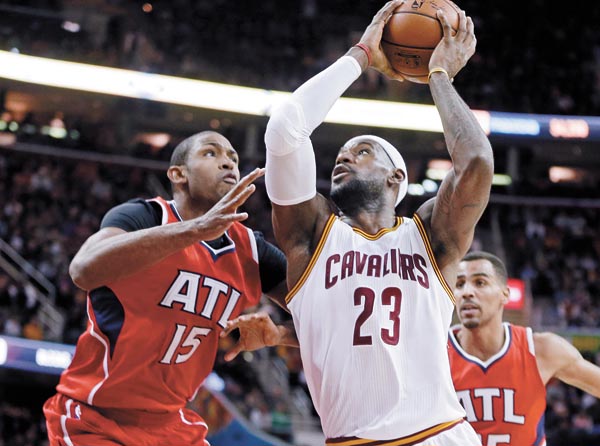 Cleveland Cavaliers’ LeBron James (23) goes up for a shot against Atlanta Hawks’ Al Horford in the first quarter of an NBA basketball game Saturday, local time, in Cleveland. [AP/NEWSIS]

It ended up being a record-setting one.

James scored 32 points and the Cavaliers made their first 11 3-point attempts, including nine in the first quarter, to rout the Atlanta Hawks 127-94 on Saturday.

The Cavaliers became the first team in NBA history to go nine for nine or better from behind the arc in a quarter, according to information provided to the team by the Elias Sports Bureau.

James, who scored a season-high 41 points Friday in Boston, hit three 3-pointers in the period and scored 11 points in the opening 3:34.

“Coming off a back-to-back I didn’t want us to have a slow start,’’ James said.

“I feel like the guys feed off my energy and I wanted to go out and be aggressive and see where it takes us. It got us to a huge lead.’’

The Cavaliers, who have won four straight, scored 41 points in first quarter. James, who didn’t play in the fourth, was 13 of 20 from the field. Kyrie Irving added 20 points.

Cavaliers set a team record by going 19 for 31 on threes. The 19 makes were a league season high.

“Guys were hitting shots and we were feeding them,’’ Irving said.

“The ball was moving. Guys were hitting each other in their shooting pockets.’’

Paul Millsap scored 16 points for the Hawks, whose four-game winning streak was snapped. Millsap scored the game’s first basket, but James’ 3-pointer gave Cleveland the lead for good as the Cavaliers hit 14 of 18 from the field in the quarter.

“We had a tough game last night, a very emotional game for us,’’ James said. “It took a lot of energy from us, but we had a lot more tonight.’’

Cleveland scored 38 points in the final period Friday to erase a 19-point deficit and continued its blistering offense against the Hawks.

Already leading 49-27 early in the second quarter, the Cavaliers scored the next 13 points to take their largest lead of the half. The margin reached 120-77 with 6:20 left.

“It was just a rough night,’’ said Atlanta guard Jeff Teague said. “We’ve got to just throw this one away. When they started making shots, I thought we put our heads down.’’

James added six rebounds and seven assists. He brought the crowd to its feet when he blocked Kent Bazemore’s layup attempt in the third quarter and gave a salute to the fans behind the basket.

The Cavaliers made 49 baskets on 39 assists, an NBA season-high.

James came into the game averaging 40.4 minutes, second in the league, but played a season-low 29 Saturday. Coach David Blatt would like to decrease that overall total, but as of now has no plans to rest James for a game.

“So this is not the time to think about resting him. This is the time to allow him to get comfortable and get in his rhythm. He’s been playing great basketball and he looks good physically. For the foreseeable future we’re going to ride that.”

Hawks G John Jenkins scored 12 points off the bench. He had back surgery in February, ending his season, and played for the first time Saturday.

“It felt great,’’ Jenkins said. “I was just worried about making my first shot.’’