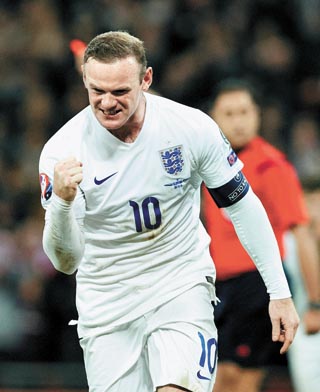 Wayne Rooney celebrates after scoring against Slovenia during a Euro 2016 Group E qualifying match at Wembley on Saturday. [AP/NEWSIS]

Personal accolades might be all the 29-year-old captain has to show for his international career after another turgid England performance showed just how far the team is from being a force.

Beating Slovenia did make it four wins out of four in European Championship qualifying, but the chances of Rooney leading England to glory at the 2016 finals look remote.

Particularly when the striker is struggling to score from open play, even against weaker opponents. Rooney’s goal in the 3-1 victory over Slovenia - canceling out Jordan Henderson’s own goal - came from a penalty. Of his last four England goals, three have come from the spot.

“He’s very important to me and to English football,’’ Coach Roy Hodgson said of Rooney after the victory secured by Danny Welbeck’s two strikes. “It was fitting tonight he was able to really get his reward on the night when it’s all about him.’’

It started with Rooney emerging onto the pitch to cheers accompanied by young sons Kai and Klay before being presented with the golden cap by Bobby Charlton.

The 77-year-old Charlton, who netted an England-record 49 goals in 106 appearances, then watched from the stands as Rooney went within five of his milestone. It was a tackle by Bostjan Cesar on Rooney that led to the spotkick and a 44th England goal for the Manchester United striker.

“It’s a special night for me,’’ Rooney said after becoming England’s joint-third top scorer alongside Jimmy Greaves. “It’s a great honor for me to represent England for 100 times now and hopefully there are many more to come.’’

A 101st cap is likely to be earned against Scotland in a friendly in Glasgow on Tuesday. England’s appearance record is held by Peter Shilton, the goalkeeper who was capped 125 times. David Beckham made a record 115 outfield appearances.

“I don’t just want to be remembered as one of the players who gets 100 caps,’’ Rooney said. “I want to be successful and we haven’t been successful. That’s how teams and players get rated.

“I would say it hasn’t always been great but it has always been magical playing for England.’’

But Rooney, who made his England debut against Australia in 2003, revealed ahead of Saturday’s match that he came close to quitting the sport at aged 14.

“I had stopped enjoying football,’’ Rooney said, recalling how a coach made him “fall back in love with football.’’

Rooney succeeded Steven Gerrard as England captain in August, despite a tempestuous relationship with fans and past concerns over his temperament.