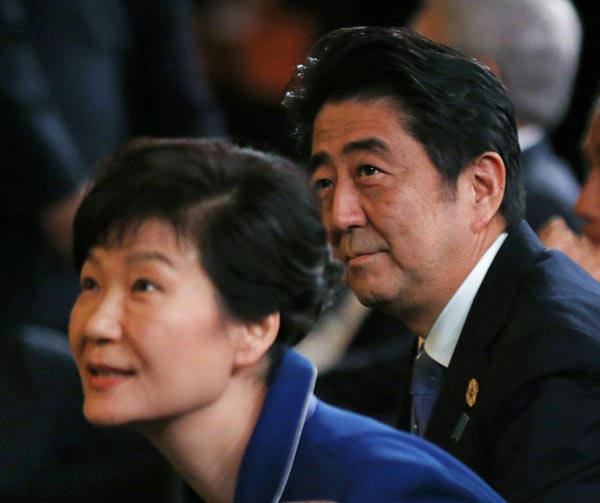 Prime Minister Shinzo Abe told President Park Geun-hye on the sidelines of the G-20 leaders’ summit in Australia that he was on board for a summit among leaders of Korea, Japan and China, according to Japanese media reports.

The Yomiuri Shimbun and other Japanese newspapers said that Park and Abe exchanged words briefly after a Group of 20 leaders’ dinner in Brisbane Saturday, citing a Japanese government official.

The two leaders held their first conversation since March last week in Beijing while seated next to each other at a dinner at the APEC meeting. Hours earlier, Abe held his first summit with President Xi Jinping.

Park has refused a one-on-one summit with Abe, demanding that his government show a sincere attitude towards resolving the issue of the Japanese military’s sexual enslavement of girls and women before and during World War II.

But on Thursday, Park proposed a trilateral foreign ministers’ summit during the ASEAN+3 meeting in Myanmar to prepare for a threeway summit of the leaders of Korea, China and Japan, suggesting a thaw in the ongoing diplomatic freeze.

In Brisbane on Saturday, Park and Abe talked after a G-20 dinner and the Asahi Shimbun reported that they were seen nodding and smiling at each other.

The Blue House is working at ironing out a Korea-China-Japan foreign ministerial talk as early as the end of the year.

But despite movement on the diplomatic front, Korea and Japan are still at odds over territorial and historical issues.

The most recent manifestation was Japan’s refusal to allow veteran Korean singer Lee Seung-chul into the country last week, which prompted the Ministry of Foreign Affairs to lodge a formal complaint to Tokyo.

Seoul and the singer claim the action was prompted by his performance on the Dokdo islets in the East Sea in August, which Japan claims under the name Takeshima.

Tokyo has yet to give a clear explanation as to why Lee was denied entry.