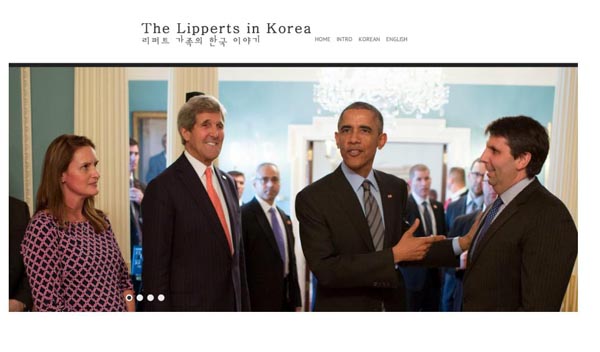 A screen capture of the blog by new U.S. ambassador to Korea Mark Lippert shows him with President Barack Obama, Secretary of State John Kerry and his wife Robyn.

Mark Lippert, newly arrived U.S. ambassador to Korea, has started a blog to introduce himself and his wife and describe their settling into Korea.

The blog, “The Lipperts in Korea,” is operated in both English and Korean and highlights the 41-year-old’s activities, from meeting high-ranking officials to going to the ballpark with his wife Robyn.

On his first written post uploaded Friday entitled “My First Days In Seoul,” Lippert started off by saying, “I look forward to interacting with you via my blog.”

He continued to say he had an “excellent consultation with Korean officials,” including Foreign Minister Yun Byung-se and Defense Minister Han Min-koo, “many of whom I already knew from my previous work in Washington.”

A photo of Lippert cheering up Korean students taking the CSAT on Nov. 13 was posted on the U.S. Embassy’s Facebook the day before.

Lippert was the former chief of staff to Secretary of Defense Chuck Hagel. From 2012 to 2013, he served as the assistant secretary of defense for Asia-Pacific security affairs.

Lippert and his wife, who is pregnant with their first child, arrived in Seoul late last month to succeed Sung Kim.

After touching on formal matters in his blog, Lippert turned to casual matters, such as taking “walks around the city” and trying out local dishes.

“We appreciated that the locals were so friendly in giving us tips for successful cooking,” Lippert wrote about his first Korean barbeque outing.

He mentioned a visit to a ballpark to watch a game between the Samsung Lions and the Nexen Heroes and how he enjoyed the “delicious” combination of chicken and beer.

Two days before Lippert started his blog, the U.S. embassy on Wednesday uploaded a photo of him on Facebook that featured him raising his left thumb, while holding two paper signs with his right hand.

The signs were messages of support written in Korean for students taking the College Scholastic Ability Test (CSAT) the following day. The messages translated to “CSAT Fighting” and “It will work out well.”

In his swearing-in speech on Oct. 24, Lippert said at the State Department in Washington that he will “work tirelessly every day” to strengthen the partnership between the United States and Korea, “one of the most important relationships that we have in the world.”

He said he would “strive to bolster our countries’ strong people-to-people ties, which reinforce our values and interests.”

Many former U.S. ambassadors to Korea, like Sung Kim and Kathleen Stephens, also operated personal blogs in an effort to communicate with locals.