Park opens up on Air Force One

Park opens up on Air Force One 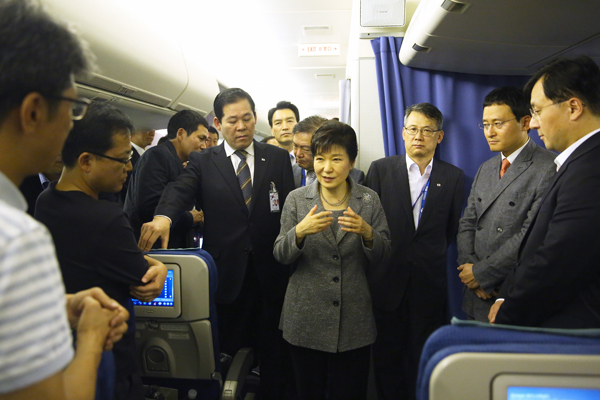 President Park Geun-hye, center, talks with reporters aboard the airplane awaiting for departure to Korea on Sunday as she wrapped up her trip to the G-20 summit in Brisbane, Australia. [NEWSIS]

President Park Geun-hye had a rare, freewheeling conversation Sunday night with correspondents on the presidential plane heading back to Seoul from her three-country trip, and she urged the National Assembly’s quick ratification of two free trade deals Korea clinched with China and New Zealand last week.

She also told stories about several diplomatic milestones reached on the trip.

The 30-minute casual chat with reporters on Air Force One was unprecedented for the president, who is known for a tendency to shun any close contact with the press. It was the longest encounter with Blue House correspondents by the president since a New Year press conference on Jan. 6 at the presidential office. The president makes it a rule to briefly shake hands with reporters and exchange small talk at the beginning and end of overseas trips, but she never indulges in lengthy, in-depth dialogue.

The event was not happenstance but was prearranged, Blue House officials said. It was prompted by the confidence that the president’s visits to China, Myanmar and Australia produced tangible achievements, including the two free trade pacts, they said. The trips were made on the occasions of three major multilateral summit meetings of the Asia-Pacific Economic Forum, the Association of Southeast Asian Nations and the Group of 20, and the president had a handful of bilateral meetings on the sidelines of the forums.

“There were a lot of twists and turns over the course of negotiations with China and New Zealand [on the free trade agreements] and the deals were on the verge of breaking down several times,” Park told reporters. “As challenging as those pacts were, they need to be ratified as soon as possible because they will benefit both the companies and the people.”

At the same time, the president didn’t forsake a chance to reiterate her latest catchphrase, saying now is the “golden time for economic recovery,” claiming her agenda for deregulation, the building of a more creative economy and her three-year economic innovation plan was highly received in the international arena.

“Now that our [economic revival] plans have been internationally recognized … If we don’t carry them out and miss the opportunity, when can we do it?” she asked.

She added that Korea should take the ratification of the free trade agreements as an impetus to achieve $40,000 per capita gross domestic product. Last year, Korea had a per capita GDP of $26,205.

The president also mentioned a consensus on Nov. 12 among South Korea, the United States and China on North Korea’s nuclear provocation, which she said had been unseen before.

“There were some discrepancies in the perceptions of North Korea between Korea and China,” she said, “and I think [the consensus] is the result of our consistent efforts to talk with China.”

U.S. President Barack Obama and Chinese President Xi Jinping reaffirmed during their bilateral meeting in Beijing last week their commitment to the complete denuclearization of the Korean Peninsula.

North Korea’s publishing of a white paper criticizing human rights in South Korea seven months earlier was something unimaginable in the past, the president added. The regime’s latest moves are the fruit of Seoul’s constant collaboration with the international society to tackle Pyongyang’s human rights situation, she said.

“Some issues such as the North Korean nuclear program or peaceful unification of the two Koreas, which we consider difficult as of now or impossibilities, will be resolved some day following our efforts,” Park said.

When asked about the motivation behind her proposal while attending the Asean+3 meeting in the Myanmar capital of Naypyidaw for a trilateral summit meeting among South Korea, China and Japan, Park said the situation has improved this year compared to last.

“But the conversation among foreign ministers lies ahead so it remains to be seen,” she said.

In regard to her indirect criticism of Japan’s weakened yen and the need for global policy collaboration on such matters during the G-20 meeting in Brisbane, Australia, on Sunday, Park told reporters she was determined to make such comments in the presence of leaders from advanced economies because the situation shouldn’t be left untouched.

“As developed countries introduce currency policies in all different directions, variabilities in the international financial markets have grown large,” she said during the multilateral summit. “We need to keep in mind that overshooting of major economies’ currency value could burden some emerging economies.”

Although she did not pinpoint Japan, she was apparently mentioning the yen falling to a seven-year low against the dollar on the back of Prime Minister Shinzo Abe’s ultra-loose monetary policy, which has caused unease among rival exporting nations including Korea.

Upon arrival in Seoul yesterday morning, the president had the task of appointing heads of two new government bodies devoted to national safety and innovating human resources management for public servants.

The two institutions, part of follow-up measures after the tragic Sewol ferry accident on April 16, will be launched after a revision to the government structure bill takes effect tomorrow.