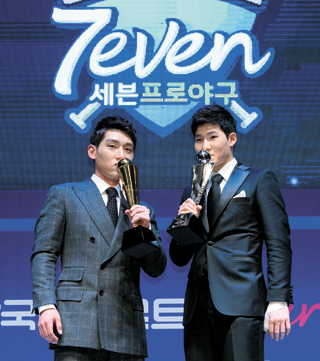 Seo Geon-chang, left, of the Nexen Heroes and Park Min-woo of the NC Dinos receive their trophies at the 2014 Korea Baseball Organization Awards held Tuesday at The-K Hotel in southern Seoul. Seo won the Most Valuable Player award with 77 of 99 votes from reporters. He set two records during the regular season with 201 hits and 135 RBIs. He also led the league in batting with a .370 average. Park was selected Rookie of the Year with 71 of 99 votes by reporters. Playing 118 games in his third year in professional baseball, he batted .298 with 124 hits, got a home run and had 40 RBIs. He also stole 50 bases, which was the second-most number of steals in the league.