Jackman back on Broadway

Jackman back on Broadway 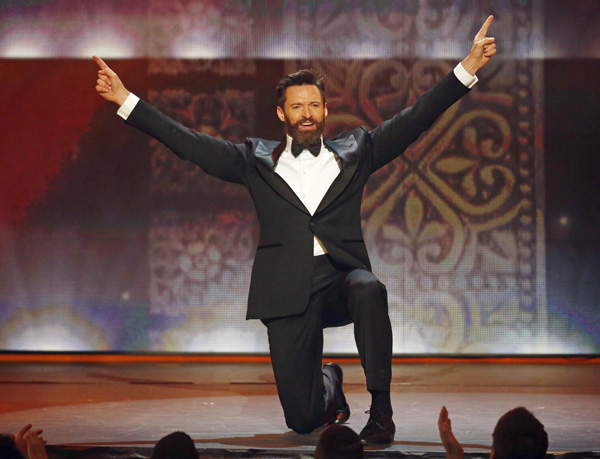 NEW YORK - Hugh Jackman made a stunning return to Broadway with a mesmerizing performance in award-winning playwright Jez Butterworth’s new drama “The River.”

Set in a remote cabin, the three-person play that opened at the Circle in the Square Theater on Sunday for a limited run won praise for the “Wolverine” actor’s portrayal of an outdoorsy man on a romantic night fishing trip.

“Jackman is catch of the day in ‘The River,’” said the New York Daily News, adding that his performance is “manly, measured and speckled with melancholy.”

The New York Times lauded the actor for conveying an impression of self-contained silence and said he “ascends with assurance to a new level as a stage actor.”

Jackman, 46, is no stranger to Broadway and won a Tony award in 2004 for “The Boy From Oz.” But unlike that rousing musical based on the life of singer/songwriter Peter Allen, or his Oscar-nominated role in the film “Les Miserables,” “The River” is an intense, mystical one-act play and Jackman is the center of it.

“It’s one of the bravest, most carefully calibrated performances he has ever given,” said the newspaper USA Today.

Jackman’s character in the play, which was previously staged at the Royal Court Theater in London, is known simply as The Man. He waxes lyrical about trout fishing and love, and he guts and cooks a fish on stage.

British actress Cush Jumbo is The Woman, who accompanies him on the night-time trout fishing trip and mysteriously goes missing, and Laura Donnelly, who starred in the London production, is The Other Woman.

The Hollywood Reporter said Jackman “brings heart and a haunted sadness to the brawny aesthete who quotes [the poet] Ted Hughes” but it found the play lacking and not up to par with Butterworth’s earlier Tony-nominated play “Jerusalem.”

“Any sense of enveloping menace, mystery and even thematic weight that might mask the writing’s more ponderously mannered aspects is missing,” it added. Reuters