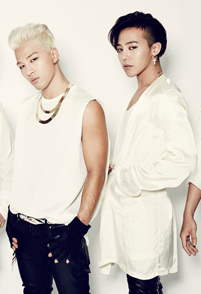 YG produces music that is loosely based on the genre, but this is the first time the major company has formed a group fully focused on it.

Under the name GD X Taeyang, the duo will release a digital single partly composed and written by G-Dragon. Producers Fliptones and Freedo were also involved in making the track.

Both the song and its music video will be unveiled at midnight on Nov. 21.

G-Dragon and Taeyang began training at YG when they were 13 years old and have been performing together for the past 14 years. Although the two have been involved in Big Bang, it’s the first time the two will work together as a duo.

YG said the two have been sharing their thoughts on the hip-hop project for a while.

The agency has a second hip-hop project in the works, which will be revealed on Dec. 2. YG said three of its musicians will participate in the second project.