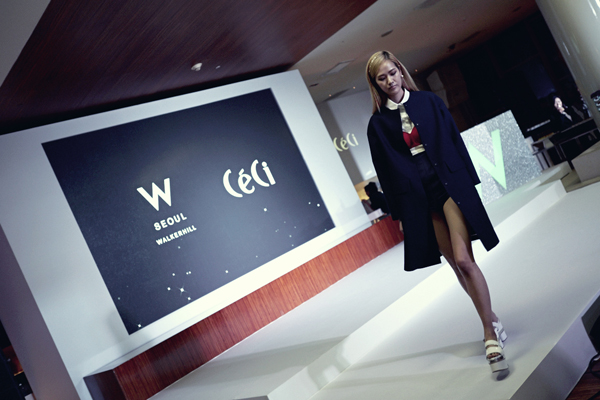 As part of the collaboration, the companies held their second annual “Cutting Edge Fashion W Hotel & Ceci” event at the hotel in Gwangjang-dong, eastern Seoul, on the evening of Nov. 20.

Approximately 300 fashion industry insiders sat across from the hotel’s signature Woo Bar to get a closer look at the creations of two rising designers, Kwon Mun-soo and Yoon Choon-ho.

During the unconventional event, menswear designer Kwon showed his 2015 spring-summer collection that was themed on idle time spent at the Han River. Many of his patterns and prints were inspired by the construction of the bridges over the Han River and flying kites.

Yoon, a womenswear designer, incorporated inspirations from a recent trip to London into his pieces. He used the same shade of red that is used in the United Kingdom’s Union Jack flag in many of his creations, such as on a sweatshirt, a bomber jacket and a dress.

Sets from renowned DJs were the pinnacle of the afterparty.

Both W Seoul Walkerhill Hotel and Ceci are shaping the fashion scene both inside and outside Korea.

The luxury boutique hotel chain started sponsoring an incubation program in collaboration with the Council of Fashion Designers of America (CFDA) in 2012.

The CFDA launched the program in 2010, but only designers living in New York were eligible at the time.

With the participation of W Hotels, however, the program now encompasses a wider range of countries.

The hotel also sponsored last year’s biannual Seoul Fashion Week, which is the largest event of its kind in Korea.

“We’ve been working with industry partners to support emerging talents [and to] encourage fashion exchanges around the world.

Ceci is a household name for many Koreans who grew up reading fashion magazines.

First published in 1994, Ceci is now distributed in Thailand and China as well as Korea.

In terms of its contribution to the local style industry, the monthly magazine organizes an annual fashion competition titled “Ceci JoongAng Design Contest,” which is in its 45th year.

The contest, which is one of the longest running in the nation, has produced famed fashion designers Lie Sang-bong and Park Youn-soo.