Post-UN, North may be reprocessing plutonium

Post-UN, North may be reprocessing plutonium 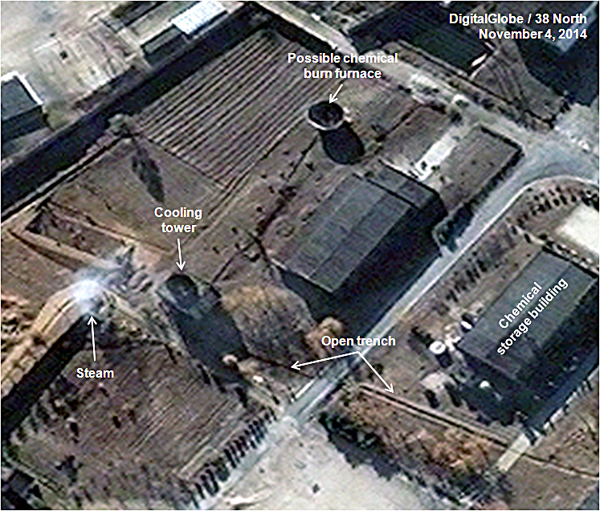 Pyongyang Thursday threatened to conduct a fourth nuclear test as it lambasted a resolution that passed a United Nations General Assembly committee Tuesday that urged North Korean leaders be held accountable for crimes against humanity.

The threats came with signs that Pyongyang may be restarting a plant that can reprocess nuclear fuel into weapons-grade plutonium for the first time in nearly six years, according to a U.S.-based think tank.

The North Korean Foreign Ministry in a statement Thursday said it “rejected” the UN resolution and went on to declare it will not “refrain from conducting a new nuclear test any longer.”

It added Pyongyang will “unrestrictedly bolster its war deterrence” in response to what it calls political provocations led by the United States, although the UN resolution was drafted by the European Union and Japan.

This was a much more vociferous response than when the UN Commission of Inquiry on Human Rights in North Korea published a landmark report in February detailing atrocities committed by North Korean leaders.

In response to the North’s nuclear threats, the South Korean Ministry of Foreign Affairs warned Pyongyang that it “will be confronted by firm countermeasures from the international community” if it pursued such threats of nuclear activity.

“Should North Korea take a measure against the international community to exacerbate the situation such as through its nuclear threats, this will be a complete violation of UN Security Council resolutions,” Noh Kwang-il, spokesman for the South Korean Foreign Ministry, said Thursday in a briefing.

“Through the recommendations put forth in the UN General Assembly resolution,” he said, “we request that North Korea adopt more detailed and substantive measures toward improving its human rights.”

The nonbinding resolution passed by the Third Committee of the United Nations General Assembly on Tuesday in New York urged the UN Security Council to refer those responsible for brutal human rights abuses in North Korea to the International Criminal Court (ICC) and targeted sanctions for such individuals. The resolution was passed with 111 countries supporting it and 19 against it, including China and Russia, with 55 abstentions.

While it is likely to pass the UN General Assembly once it is put up for a vote next month, China and Russia are expected to exercise their veto power on the resolution in the Security Council.

On Wednesday, the U.S.-Korea Institute at Johns Hopkins School of Advanced International Studies said on its 38 North website that it analyzed recent commercial satellite imagery that suggests a lengthy shutdown of a five-megawatt reactor at the Yongbyon nuclear facility.

It went on to point out that the reactor may have been shut down for 10 weeks, longer than the time needed for regular maintenance. This could have allowed North Korea to remove a limited number of fuel rods from the facility, possibly for reprocessing to extract weapons-grade plutonium.

The satellite imagery taken in early November shows vapor clouds at a radiochemical laboratory that reprocesses plutonium from spent fuel rods, and vehicles carrying cargo at the reactor were also spotted.

Last year, Pyongyang restarted the reactor that had been shut down under a 2007 disarmament agreement with the United States, Russia, Japan, China and South Korea in exchange for economic and humanitarian aid.

During a defense meeting at the National Assembly Thursday, Minister of National Defense Han Min-koo said, “I don’t see any chances of North Korea conducting a nuclear test soon, though it appears prepared to do so.”

“The North Korean leadership recently saw the trial process for Khmer Rouge leaders and is said to have become shaken,” a government official told the JoongAng Ilbo.

In October, hearings on charges of genocide against two former leaders of Cambodia’s Khmer Rouge, Nuon Chea and Khieu Samphan, now in their 80s, kicked off in an attempt to seek justice for some 1.7 million deaths during their disastrous 1970s rule. The UN-backed tribunal, expected to last until 2017, covers crimes against humanity and other war crimes.

Analysts point out that Pyongyang plans to use competition between the United States and China to their advantage to see that the resolution is not passed in the Security Council.

The Chinese Foreign Ministry said Wednesday that it does not support the resolution’s passage, while Washington immediately lauded the efforts.

Jeff Rathke, a U.S. State Department spokesman, said in a briefing Wednesday in regards to the North’s threatening more nuclear tests, “It would certainly be unfortunate to threaten that kind of activity in response to the legitimate focus on North Korea’s human rights situation by the international community.”