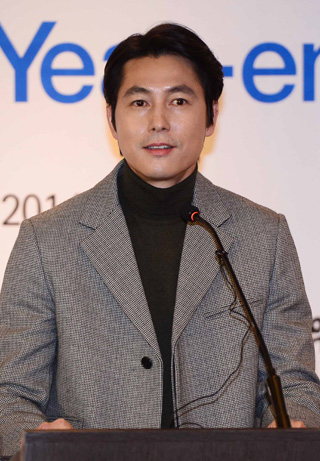 Top actor Jung Woo-sung will become the first Korean to be appointed a goodwill ambassador to the United Nations High Commissioner for Refugees (UNHCR), alongside Hollywood star and humanitarian Angelina Jolie.

During an interview at the Plaza Hotel in central Seoul on Friday, Jung described the memorable moment he met a young boy during a recent visit to a refugee camp in Nepal.

“The boy told me that his dream was to become an actor like me,” said the actor, adding that the child said he was inspired by “A Moment to Remember,” the 2004 hit film Jung starred in.

“However, I was very aware of his lost future,” he added, describing the plight of refugees across the world.

“I choked up thinking that a child who doesn’t have a country, education or medical support, who has no guarantee of his future, holds such dreams and does not let go of hope.”

Jung became the first celebrity here to become appointed as an honorary advocate of the UNHCR in May. He will take on the title of goodwill ambassador next year, according to the agency’s Korean office yesterday.

Including Jolie, there are only 10 UNHCR goodwill ambassadors across the world.

Jung made his first visit to Nepal from Nov. 3 as an honorary advocate of the UNHCR. During the weeklong trip, he met with refugees and listened to their stories.

“It was a priceless experience for me,” said Jung. “We thought of many camps to visit, and Nepal was chosen after representative of UNHCR Korea Dirk Hebecker considered a location where the lives of refugees and the activities of the organizations supporting them could be clearly exemplified.”

He recalled a visit to a refugee camp in Bhutan.

“A group of adolescents prepared a small play after hearing that a Korean actor was visiting .?.?. I was touched by their sincerity and expression of emotions,” said Jung. “They told me, ‘We want to become actors and go to Korea.’ I told them to please realize their dreams.”

He described the anxiety he felt the day before he headed to Nepal, recalling, “It was the kind of anxiety that I first felt when I went into a film shoot as a youth.”

But he said he was very touched by how both the young and the elderly “never lost their hope.”

As of August, there were more than 25,000 refugees in Nepal, according to UNHCR, and 173 asylum seekers.

“Korea has gone from being a country that received aid to becoming one that is giving aid, and it is my hope that Korea can continue playing a positive role in the world,” Jung said.

At a year-end reception held by the agency at Plaza Hotel on the same day, Hebecker told the Korea JoongAng Daily, “We chose Jung Woo-sung from a number of people who were interested in the role and selected him because he made a long-term commitment to us.”

He added that he was impressed by how the refugees warmed to Jung.