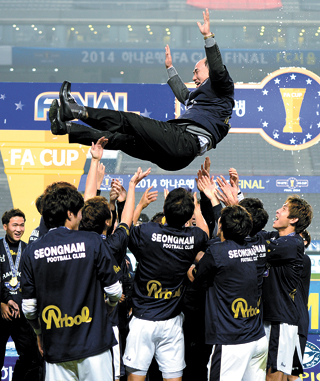 It was Seongnam’s third cup victory, after two when it was Seongnam Ilhwa Chunma FC, and Seoul failed to raise the cup for first time in 16 years.

The FA Cup final was exactly what most analysts and fans did not expect. Seongnam, ranked 11th of 12 teams in the K League, was considered much weaker than fourth-place Seoul.

After 90 minutes of regulation time and 30 minutes of extra time, the score was still 0-0 after both teams had scoring chances.

In the 22nd minute, Seongnam goalie Park Jun-hyuk tried to grab the ball in the left corner of the penalty box, but it bounced away to Sergio Escudero. Escudero tried to get off a shot at an empty net, but was tackled by Park. Defender Kwak Hae-seong blocked another attempt by Escudero and cleared the ball.

In the 81st minute, Seoul defender Kim Jin-kyu also failed to score as his header hit the right post.

As the match approached the end of extra time, Seoul replaced goalie Kim Yong-dae with Yoo Sang-hoon in the 28th minute. Seongnam Manager Kim Hag-bum also tried to send out veteran goalie Jeon Sang-wook to replace Park, but the game was called in play.

Seoul Manager Choi Yong-soo ordered the players to keep the ball as long as possible, and Jeon never got into the game.

Park also blocked third kicker Mauricio Molina, while all the Seongnam players put the ball into the net.