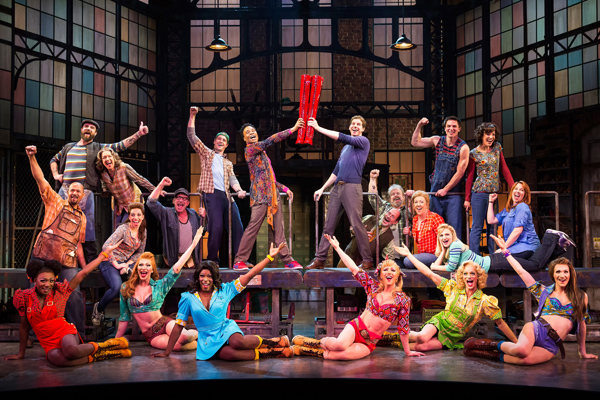 A Korean production of Broadway’s award-winning musical “Kinky Boots” will be staged from next month. Above is a shot from last year’s premier. See THEATER, below. Provided by the organizer

YANG BANG-EAN’S EVOLUTION 2014
National Theater of Korea
Friday to Sunday: International Korean-Japanese musician Yang Bang-ean is holding a solo concert to “show his own personality,” according to the event’s organizers.
The concert starts at 8 p.m. on Friday; 3 p.m. and 8 p.m. on Saturday; and 3 p.m. on Sunday.
Tickets range from 20,000 won to 80,000 won ($18 to $72).
Dongguk University Station, line No. 3, exit 6.


2014 MBLAQ CURTAIN CALL
Olympic Hall, Olympic Park
Saturday and Sunday: Boy group MBLAQ invites you to celebrate its fifth anniversary. The name of the show is “Curtain Call” in honor of member Lee Joon, who is leaving the band. This will be his final performance.
According to the agency, the group’s members will also perform solo.
The concert on Saturday starts at 7 p.m. and Sunday at 5 p.m.
Tickets are 88,000 won.
Olympic Park Station, line No. 5, exit 3.


TENACIOUS D
Olympic Park
Dec. 5 and 6: Jack Black, who is famous for his movies “School of Rock,” “High Fidelity” and “Kung Fu Panda,” is coming to Seoul as part of Tenacious D, the duo he performs in with guitarist Kyle Gass. Known as one of the biggest cult bands in the world, Tenacious D is stopping in Seoul for two days on a tour of Asia. Private Curve, the event’s organizer, said it has been trying to invite the duo for the past five years and “finally managed to organize the concert as part of an Asian tour, having the Seoul concerts in the core.”
The concert starts at 7 p.m.
Tickets range from 99,000 won to 121,000 won.
Olympic Park Station, line No. 5, exit 3.


INGER MARIE: SONG FOR YOU FAR AWAY
Mapo Art Center, Art Hall Mac
Dec. 7: Winter is just around the corner, and so is a performance by Norwegian jazz vocalist Inger Marie, who is returning to Korea to warm up the audience with her mellifluous voice.
This time, she has prepared performances with Shin Dong-jin, bassist Kim Sung-soo and pianist Bee-an. Renowned jazz guitarist Park Youn-woo is also invited, as is trumpeter Per Willy Aaserud from Norway.
The concert starts at 5 p.m.
Tickets range from 30,000 won to 70,000 won.
Daeheung Station, line No. 6, exit 2.


LEE SEUNG-CHUL CONCERT
COEX, Hall D
Dec. 24 to Dec. 26: One of Korea’s top singers, Lee Seung-chul, will return to celebrate Christmas with the concert “Ultra Cap Song.” The concert will be particularly exciting because Lee has asked for the audience to join in, the singer’s agency said.
The concerts start at 8 p.m.
Tickets range from 77,000 won to 154,000 won.
Samseong Station, line No. 2, exit 5. 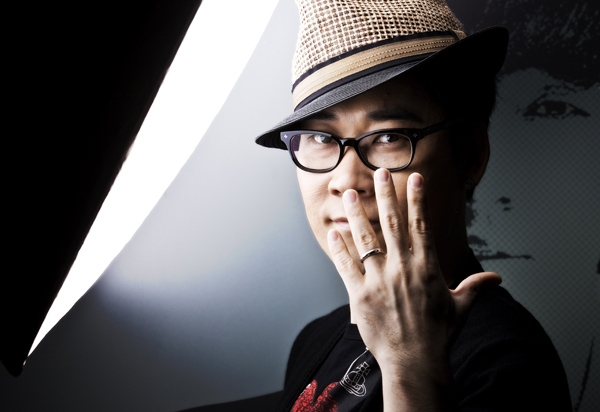 Olympic Hall, Olympic Park
Dec. 24 to Dec. 27: Kim Yeon-woo, who is best known for his appearance on MBC’s hit program “Survival: I Am a Singer,” is planning to hold a Christmas concert. Kim has gained popularity with his smooth and mellow voice, which pairs well with his sentimental lyrics.
This time, Kim is ready to appeal to the sensitive side of fans with songs describing love stories that are doomed or end badly.
According to the agency, he is returning with a new mini-album before the concert, on Dec. 27, and he will perform the new songs at the concert.
Tickets range from 99,000 won to 143,000 won.
Olympic Park Station, line No. 5, exit 3.


2014 CHRISTMAS CONCERT -
YUKI KURAMOTO AND HIS FRIENDS
Seoul Arts Center, Concert Hall
Dec. 25: Christmas is just around the corner, and Yuki Kuramoto will once again perform “Christmas Concert.” For this year’s annual show, famous classical violinist Richard Yongjae O’Neill will join him. Kuramoto has been holding concerts with special guests around Christmas since 2008.
The concert starts at 7 p.m.
Tickets range from 30,000 won to 120,000 won.
Nambu Bus Terminal Station, line No. 3, exit 5.


KIM BUM-SOO GET ALRIGHT SHOW: BEFORE & AFTER
Korea University, Hwajung Gymnasium
Dec 30 and 31: Kim Bum-soo, a singer with 16 years of experience, has finished his solo concert “2014 Kim Bum-soo Get Alright Show.” After the success of the show, Kim plans to celebrate New Year with an encore concert. “With his excellent vocal sounds, he is putting extra effort in to ensure that the audiences are healed [from stress],” his agency said.
Tickets rage from 88,000 won to 121,000 won.
An-am Station, line No. 6, exit 2.


2014 YEAR-END CONCERT-
JUNG-IN, LEE SSANG, HAHA & SKULL
SK Handball Stadium, Olympic Park
Dec. 30 and 31: Music icons Jung-In, Lee Ssang, Haha & Skull are gathering together to wrap up the year with a concert under the theme “Union X.”
The show will be a collaboration among the four musicians.
The program’s promoter, CJ E&M, said, “The theme of ‘Union X’ entails two meanings. The ‘union’ means not only for the singers, but also the union with the audience.”
This will be the first performance of Gil Sung-joon, aka Gil of veteran hip-hop duo Lee Ssang, since taking an eight-month hiatus after he was caught driving under the influence of alcohol.
Tickets range from 110,000 won to 121,000 won.
Olympic Park Station, line No. 5, exit 3.

I AM YOU
Kwanglim Arts Center 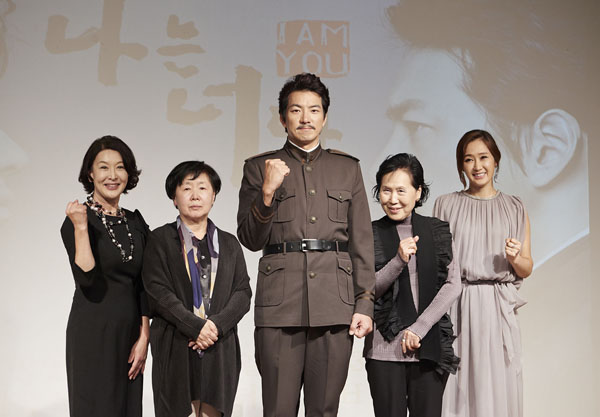 Thursday to Dec. 31: Ahn Joong-geun is the most well-known Korean independent activist because he assassinated Japanese Gov. Hirobumi Ito, one of the central figures of the Korea Annexation Treaty.
The play is about Ahn Joong-saeng, the activist’s youngest son. It illustrates the life he led after his father’s execution, depicting how he was forced to struggle under the shadow cast by his legacy.
Song Il-kook, who is currently enjoying popularity due to his appearances in “Return of Superman” takes on two roles, as Ahn Joong-saeng and Ahn Joong-geun.
The performance starts weekdays at 8 p.m.; on Thursday at 3 p.m. and 8 p.m.; Saturday at 3 p.m. and 7 p.m.; and Sunday at 3 p.m.; on Christmas at 3 p.m. and 7 p.m.
There are no performances on Mondays.
Tickets range from 50,000 won to 100,000 won.
Apgujeong Station, line No. 3, exit 5.

AIDA
Seoul Arts Center, Opera Hall
To Sunday: La Scala’s original Italian version of “Aida” will be performed in Seoul to commemorate the 130th anniversary of ties between Korea and Italy.
The show tells the story of Aida, Nubia’s princess, who is enslaved in Egypt, and it vividly describes the tragic love story between her and Radames. Lila De Nobili, a fashion designer who has worked with Hermes and Lancome, created the outfits.
The performance starts at 7:30 p.m. Nov. 25 to 28; 1 p.m. and 7 p.m. on Nov. 29; and 5 p.m. on Nov. 30.
Tickets range from 77,000 won to 330,000 won.
Nambu Bus Terminal Station, line No. 3, exit 5.

THE NUTCRACKER
Korean National Ballet: Seoul Arts Center
Dec. 20 to 28:
Universal Ballet: Universal Arts Center
Dec. 19 to Dec. 31: Korea’s two major ballet companies are staging two versions of “The Nutcracker,” the traditional holiday performance.
Along with “Swan Lake” and “Sleeping Beauty,” “The Nutcracker” is one of three ballets composed by Tchaikovsky.
This time, the Korean National Ballet presents its version adapted from the ballet choreographed by Yury Nikolayevich Grigorovich, the art director of Moscow’s Bolshoi Theater from 1964 to 1995.
The performance starts weekdays at 7:30 p.m. and at 2 p.m. and 6 p.m. on weekends.
Tickets range from 5,000 won to 90,000 won.
Nambu Bus Terminal Station, line No. 3, exit 5.
More than 700,000 people have watched the Universal Ballet Company’s version of “The Nutcracker” since it was first staged.
The performance starts on weekdays at 4 p.m. and 8 p.m.; on Saturdays at 3 p.m. and 7 p.m.; and on Sundays at 2 p.m. and 6 p.m. There are no shows on Mondays.
Tickets range from 10,000 won to 100,000 won.
Achasan Station, line No. 5, exit 3.


A DWARF WHO LOVED SNOW WHITE
Daehangno Art One Theater
To Jan. 11: The story of a princess poisoned by her envious stepmother and revived by a prince’s true-love kiss is most widely known as the fairy tale “Snow White.” The musical has been presenting an adaptation of Snow White since 2001, but the performance stars a mute dwarf, Bandari, who harbors special feelings for the protagonist.
Shows start at 8 p.m. Tuesday through Friday; at 3 p.m. and 6 p.m. on Saturdays and at 2 p.m. and 5 p.m. on Sundays and public holidays. There are no performances on Mondays.
Tickets range from 30,000 won to 50,000 won.
Hyehwa Station, line No. 4, exit 2.


KINKY BOOTS
Chungmu Art Hall
Dec. 2 to Feb. 22: Top-ranking Broadway musical “Kinky Boots” is coming to Korea for the first time. The performance received six Tony awards, all in 2013, and won a Grammy for the best musical album in 2014.
The show is based on the true story about a man called Charley who took over an ailing shoe-making company owned by his parents. He hopes to make it a success again by creating high heels for men.
Pop diva Cyndi Lauper wrote and composed songs for the musical, which will be reinterpreted in Seoul by Korean performers.
Tickets range from 50,000 won to 140,000 won.
Sindang Station, lines Nos. 2 and 6, exits 1 or 9.

BAEBIJANG-JEON
Jeongdong Theater
To Sunday: “Baebijang-jeon,” a classic novel written by an unknown author in the late Joseon Dynasty (1392-1910), evokes laughter by satirizing the hypocrisy of the period’s ruling classes and natural human desires. The novel was also made into a Korean traditional opera and a musical, thus verifying its entertainment value.
Shows start at 4 p.m. and 8 p.m. every day. There are no shows on Mondays.
Tickets range from 40,000 won to 60,000 won.
City Hall Station, line No. 2, exit 12.