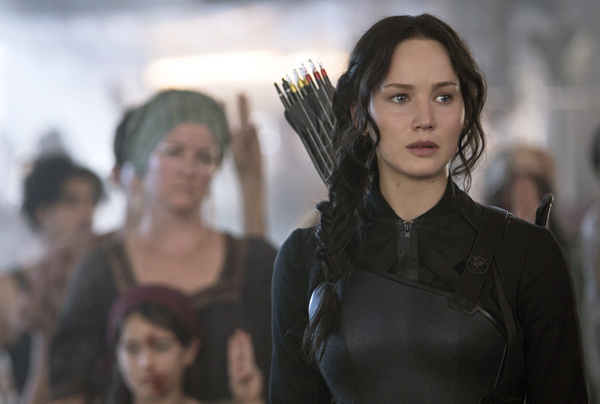 In this image released by Lionsgate, Jennifer Lawrence portrays Katniss Everdeen in a scene from “The Hunger Games: Mockingjay Part 1.” [AP/NEWSIS]

“Mockingjay, Part 1’’ didn’t catch fire like the previous installments of “The Hunger Games,’’ but it still had the biggest opening of the year with $123 million at the weekend box office, according to studio estimates Sunday.

Lionsgate’s “Mockingjay’’ opened well below the $158 million debut of last year’s “Hunger Games: Catching Fire’’ and the $153 million opening of the 2012 original. But even with a $30-million-plus slide in the franchise, “Mockingjay’’ far surpassed the previous top weekend of the year: the $100 million debut of “Transformers: Age of Extinction.’’

The result made for some unusual ironies. The biggest opening of the year (and by a wide margin) was seen by some as a disappointment. After initial box office receipts of “Mockingjay’’ rolled in Friday suggested a weekend take below expectations, Lions Gate Entertainment’s stock dipped 5 percent.

But the decision to split the final book in Suzanne Collins’ dystopian trilogy into two films was clearly lucrative for Lionsgate. “Mockingjay’’ did even better overseas, where it made $152 million over the weekend, accounting altogether for a $275 million global opening.

“It’s the biggest opening of the year, so it really illustrates the strength of the franchise,’’ said David Spitz, head of distribution for Lionsgate, noting the North American opening was the 15th best ever.

Spitz declined to answer questions about Wall Street’s reaction to the opening, or what the effect may have been of splitting the third book in two.

“It speaks for itself,’’ Spitz said of the result.

Dividing the book pushed much of the big drama of “Mockingjay’’ to the second film, scheduled for release in November 2015. On the same November weekend in 2010, “Harry Potter and the Deathly Hallows: Part 1’’- which similarly split the series’ last book into two - opened almost identically with $125 million. A year later, the second “Deathly Hallows’’ film debuted bigger than all previous “Harry Potter’’ films with $169 million.

The release calendar made way for “Mockingjay,’’ as no other new wide releases hit theaters. In its third week of release, the Disney animated adventure “Big Hero 6’’ moved into second place with $20.1 million. Christopher Nolan’s space epic “Interstellar’’ came in third with $15.1 million, also in its third week.