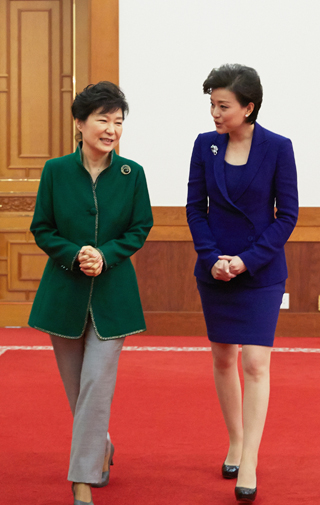 President Park Geun-hye, left, walks with China’s famed anchorwoman Yang Lan after an exclusive interview at the Blue House on Nov. 6 ahead of the APEC summit in Beijing. The two-part interview was aired on Beijing TV on Nov. 9 and Sunday. [NEWSIS]


Beijing TV, China’s state-owned TV network, has aired the second installment of a two-part interview with President Park Geun-hye conducted by celebrity anchorwoman Yang Lan, who visited the Blue House on Nov. 6 for the encounter.

In the second part aired on “Yang Lan One on One” Sunday, Park said what she wishes to see after the end of her five-year term is a “country developing in the right direction under stabilized circumstances.”

“I no longer want to worry about the stability status of the country when I leave office, and that is the reason I am trying hard now,” she added.

It answers to the question Yang asked why she chose politics as her calling even after both of her parents were assassinated and she herself had been betrayed by people.

The president also said the biggest hardship she has faced since her inauguration in February 2013 was to see evil practices and corruption hurt the people, reflecting her goal of fighting against corruption, which coincides with a similar drive by her Chinese counterpart Xi Jinping.

“I think corruption and evil practices drain the energy out of people and deprive the economy of vigor,” she said. “I am determined to fix that so our descendants don’t inherit them.”

The interview was part of a series of special interviews as China hosted the Asia-Pacific Economic Cooperation summit Nov. 10-11. The first part was aired in China on Nov. 9.

The 46-year-old Yang, often described as China’s answer to Oprah Winfrey, was listed as one of 100 Power Women by Forbes magazine last year. She is the co-founder and co-chairwoman of Sun Media Group, which controls some 60 subsidiaries.

Starting with Yang doing a stand-up spot in front of the Blue House in central Seoul - a spot that Chinese tourists like to have their photos taken - the first part of the 30-minute interview showed clips from the day President Park was inaugurated. The interview was in a question-and-answer format and related clips were inserted between different questions.

In the second interview, Park said she was exposed to Chinese culture and philosophy from a young age and was able to understand Chinese values.

“Reading Chinese philosophical history, I learned the lesson that however challenging an ordeal you may face, you should persistently cultivate yourself and discipline your mind and rightfully carry out the disciple with wisdom and will,” she said.

She added that Chinese classical literature gave her peace of mind after losing both of her parents in assassinations and lessons from the classics served as the “lighthouse of her mind.”