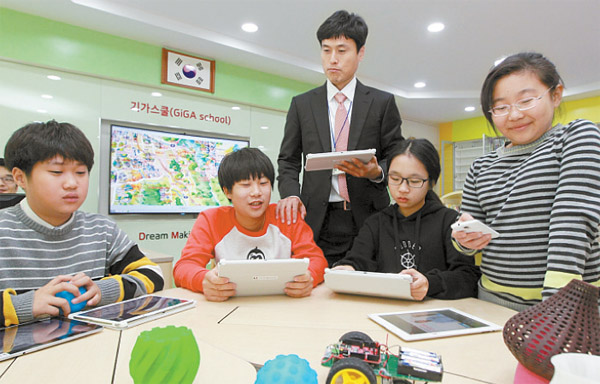 KT, the second-largest mobile carrier in Korea, said it has established GiGA Internet, which is 10 times faster than regular Internet, at an elementary school in the demilitarized zone (DMZ).

The mobile carrier said it hopes to narrow the educational gap between remote areas and metropolitan cities with its fast Internet connection.

“We created the GiGA School at the DMZ in hopes that the students of Daeseong-dong Elementary School will be able to study in the best educational system without constraints because of their location,” said KT spokesman Lim Heon-moon.

Daeseong-dong in Paju City, North Gyeonggi, adjacent to the military demarcation line, is a difficult place to install WiFi connections.

Since 2012, KT has worked with the residents of Daeseong-dong and the United Nations Command overseeing the town to build the Internet infrastructure.

In their classrooms, the students now have access to GiGA UHD TV, tablet PCs and GiGA Paper, which can read and send writing from a piece of paper to a smart device.

KT said it also has provided 3D printers for students to use creatively. The mobile carrier also plans to provide the school with a video mentoring system called KT Dream School.

The elementary school is KT’s second GiGA project after it improved Internet infrastructure on the isolated island of Imjado, South Jeolla.

“We hope that children living in the DMZ, which symbolizes the tragic division of the country and the wish for unification, will grow into the leaders of the future unification,” Lim said.