Navy shows Tongyeong can do some jobs properly

Navy shows Tongyeong can do some jobs properly 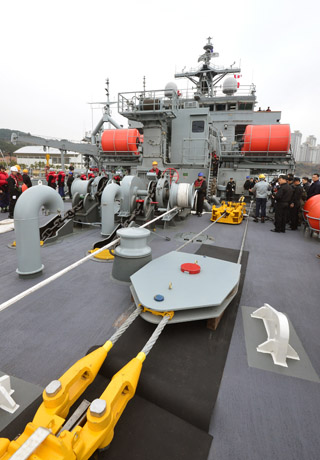 Navy sailors demonstrate towing equipment on the rescue and salvage ship Tongyeong in the sea off Busan on Wednesday. [Joint Press Corps]

BUSAN - In a move to quell criticism that the military is planning to operate a substandard rescue and salvage ship, the Navy unveiled the troubled Tongyeong on Wednesday and demonstrated its capabilities.

Around 12:30 p.m., the ship sailed to waters about 20 kilometers (12 miles) southwest of the Navy Operations Command in Busan. Waves were still high as a storm warning was only lifted around 5 a.m., but the Tongyeong managed to place itself on top of its supposed target within 10 minutes in a joint operation with the mine hunter Ongjin.

Earlier this week, the military said it planned to deploy the problem-ridden ship, which became a symbol of procurement irregularities, to replace the aged Gwangyang and Pyeongtaek as both vessels were far overdue for retirement. The military said it would start using the Tongyeong and upgrade its faulty sonar and search equipment in the coming years. The Joint Chiefs of Staff is scheduled to meet Friday to approve the plan. The Navy held the demonstration in order to assuage the public ahead of the unprecedented deployment of the weapons system, which failed to meet the required operational standards from the start.

The Navy refused to accept delivery of the 3,500-ton Tongyeong, completed in 2012 at the price of 159 billion won ($143 million), from Daewoo Shipbuilding and Marine Engineering, complaining that its equipment didn’t work properly. Daewoo said the Defense Acquisition Program Administration provided it with substandard hull-mounted sonar systems and remotely operated underwater vehicles, commonly known as ROVs.

At the demonstration arranged by the Navy and Daewoo Shipbuilding and Marine Engineering, the Tongyeong did not use its hull-mounted sonar. The mine hunter Ongjin guided the ship to its target.

“This hull-mounted sonar is suitable for commercial vessels but not for military operation,” said Navy Capt. Lee Jeong-jae of the Defense Acquisition Program Administration. “Because we are going to scrap the contract and return it to the supplier, we cannot turn it on.”

The military and procurement authority decided that the ship’s sonar will be removed and it will be returned to the supplier. Finding a new contractor, signing the deal, building the sonar system, installing it and testing its function will take about two years.

During Wednesday’s demonstration, the problem-ridden ROVs were also not used, but other equipment was operated. The Tongyeong successfully performed the missions of salvaging and towing a sunken ship and supporting divers for a rescue operation.

“About 160 other devices are operating properly,” said Park Jeong-sik, captain of the Tongyeong. “We conducted a performance evaluation last year on 92 functions, and the ship passed all but the hull-mounted sonar and ROV’s ultrasonic camera.”

“Without the sonar and ultrasonic camera of the ROV, the Tongyeong can perform far better than the aged Gwangyang,” said Rear Adm. Lee Byung-kwon. “It is urgent to operate the Tongyeong as soon as possible to replace the Gwangyang.”