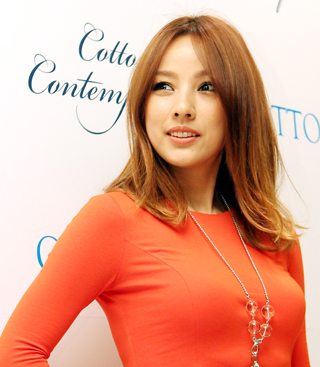 Sexy diva Lee Hyo-ri is in trouble after being accused of mislabeling her homegrown beans.

The singer, who settled down on Jeju Island after getting married to musician Lee Sang-soon last September, is leading a simple lifestyle by sticking to a vegetarian diet and growing her own beans and veggies.

Lee published a post on her blog early October including numerous photos of herself and her husband harvesting beans in their front yard and selling them at a local market.

She promoted her beans as organic, so one Internet user reported her to the National Agricultural Products Quality Management Services for breaking a law that asserts a seller must be certified by a state-run agricultural organization to sell organically farmed products.

Those who violate the law face fines of up to 30 million won (about $27,000) or could serve up to three years in prison.

“Lee was not aware of such a certification system. She just grew the beans and sold them at a local market,” Lee’s agency, B2M Entertainment, said in response to the issue.

“She received a call from the National Agricultural Products Quality Management Services and the organization said it will check whether she actually grew the beans by herself.”