Kim Yo-jong, little sister of Jong-un, on the rise

Kim Yo-jong, little sister of Jong-un, on the rise 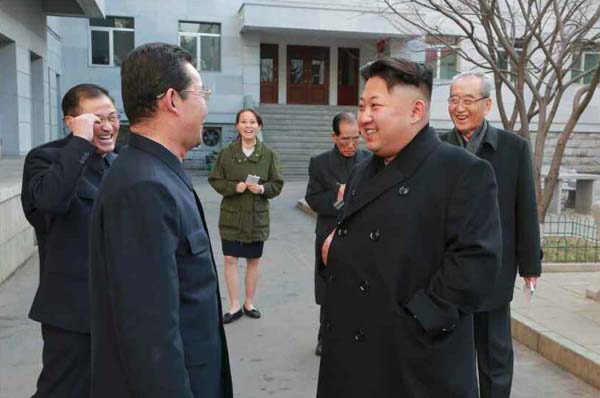 The younger sister of North Korean leader Kim Jong-un is serving as a deputy director of the Workers’ Party, a key position in Pyongyang’s leadership, fueling speculation that she has stepped into the political role formerly played by her aunt.

The North’s Korean Central News Agency reported Thursday that North Korean leader Kim visited an animation studio accompanied by his sister, Kim Yo-jong. In the report, the younger sister of the supreme leader’s title was introduced as a deputy director of the Workers’ Party’s Central Committee.

That department, along with the Organization and Guidance Department, is a key organ of the party and it promotes the North’s governing ideology and personality cult, crucial levers in maintaining the dictatorship.

Little is known about Kim Yo-jong, although South Korean officials said she is believed to have been born in 1987 or 1988 and that she is the youngest of the late leader Kim Jong-il’s seven children.

Her mother, Ko Yong-hui, was the fourth wife of Kim Jong-il and they had three children including current leader Jong-un.

She studied in Switzerland with Kim Jong-un. In 2011, she was first spotted by South Korean media while attending an Eric Clapton concert in Singapore.

As her public activities quickened in recent weeks, speculation grew that she is being groomed to play the role of the “princess” in the North’s personality cult to assist her elder brother.

Kim Kyong-hui, younger sister of the late leader Kim Jong-il, played a similar role by serving in key posts such as the secretary for organization of the Workers’ Party and as a general of the People’s Army. She disappeared from public view after her husband Jang Song-thaek was purged and executed in December 2013 for high treason.

While her aunt’s political debut came when she was 41 years old, Kim Yo-jong entered the Pyongyang inner circle at much a younger age. She made her political debut when she attended the election of delegates for the Supreme People’s Assembly in April. At the time, she accompanied her elder brother with other top North Korean officials including Choe Ryong-hae and Hwang Pyong-so.

Her public activities multiplied after Kim Jong-un came out of seclusion earlier this year. She accompanied him to a fisheries factory and on a tour of an anti-American propaganda museum.

In July 2012, when Pyongyang opened the Rungna People’s Pleasure Ground, an amusement park, high-ranking officials stood rigidly at attention and applauded Kim Jong-un and his wife Ri Sol-ju. But Kim Yo-jong watched from a distance, skipped around a garden, and even burst out laughing behind her brother’s back.