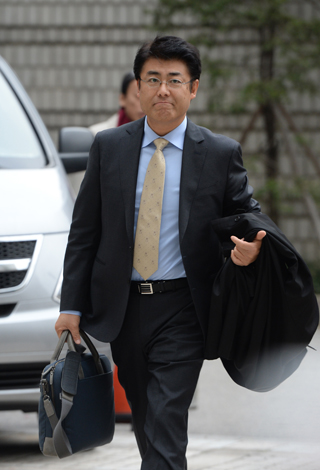 Tatsuya Kato, the former Seoul bureau chief of Japan’s Sankei Shimbun, denied all charges against him at the start of his Seoul trial on Thursday for defaming President Park Geun-hye.

Kato was charged in October with defaming the president in an Aug. 3 report that said the president was missing for seven hours on April 16, the day the Sewol ferry sank, and alleged that she was secretly meeting a recently divorced former aide.

At the first hearing at Seoul Central District Court, Kato said he wonders whether “a report on the love life of the president, who is a single woman, can make a defamation case.”

“I reported about Koreans’ perception of the president and had no intention of slandering her,” he said. “I hope that the trial proceeds strictly according to the law in Korea, a constitutional state.”

The trial drew almost 50 Japanese journalists who showed up hours before it began, an indication of its importance in Japan. It also drew members of Korean conservative groups defending the honor of the president. They created a violent disturbance by throwing eggs at Kato’s sedan and attaching a sign that read “Arrest Kato right away” on the car.

During the hearing, Kato’s lawyer said the ex-bureau chief wrote the report to “publicize the falling approval ratings for President Park in the wake of the Sewol ferry accident.” The story had “no purpose to defame the president but was for the sake of public interest.”

The lawyer further noted that French media outlets have published news reports about President Francois Hollande and his former partner, but he has never heard of anyone being charged with defamation.

On Aug. 3, the 48-year-old Japanese journalist wrote an online report in Japanese titled “President Park Geun-hye, missing on the day of the ferry’s sinking ... With whom did she meet at the time?”

The report said the president was missing for seven hours on April 16, the day the Sewol ferry sank. The cited sources included a column in a major conservative daily, the Chosun Ilbo, and unidentified sources in Korea’s financial industry.

A conservative group filed a suit on Aug. 9, which eventually led the prosecution to launch an investigation into the case. The Blue House subsequently submitted documents to the prosecution detailing Park’s schedule and security details for the day of the accident to prove she was in the presidential office.

The prosecution’s indictment of Kato on Oct. 9 sparked concerns about freedom of the press in Korea. The Seoul Foreign Correspondents’ Club sent an open letter to the prosecutor general saying the decision “could result in severely interfering with journalists’ right to reporting.” Reporters Without Borders also defended the Sankei Shimbun, arguing the subject of the column was clearly in the public interest.

Kato’s lawyer said Park’s own attitude about the case was relevant.

“No one can be punished for defamation against the will of the victim,” he said, “but the record does not detail the intention of President Park. … [The president] should clarify whether she wants [the plaintiff] to be punished or not.” Prosecutors refuted the claim, saying a charge is possible without the victim making a complaint.

Kato is currently under a travel ban that prevents him from leaving Korea until Jan. 15. Judges refused Kato’s request to lift the ban. The next hearing is scheduled for 2 p.m. on Dec. 15.
BY SEO JI-EUN [spring@joongang.co.kr]