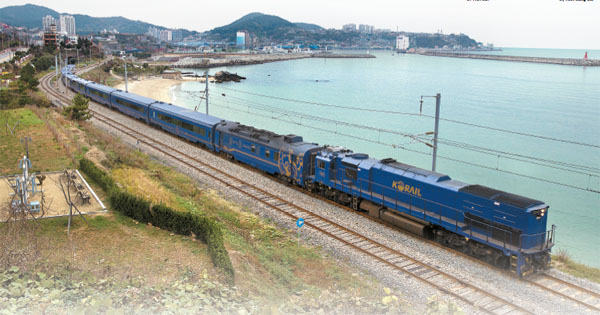 Korail Tourism Development operates a travel program called Haerang that hosts travelers in its hotel-like guest rooms on the train. In the photo, Haerang trains runs near Donghae Station in the eastern part of Korea. By Ahn Sung-sik

If you set your mind on visiting the best travel destinations in Korea within one trip, there is just one more decision left to make: should you travel by train or bus?

Korail offers a luxurious sleeper train that comes with unlimited food and drink, while Hana Tour, one of the largest travel agencies in Korea, takes its guests to the most luxurious hotels in each region on a special bus.

One reporter at the JoongAng Ilbo, an affiliate of the Korea JoongAng Daily, tried a two-night, three-day train trip from Seoul to Suncheon, Tongyeong, Busan, Jeongdongjin and Jecheon. Another joined Hana Tour’s Discover Korea Tour for three nights and four days from Seoul to Jinju, Busan, Gyeongju, Andong, Pyeongchang and Sokcho.


The all-inclusive Discover Korea Tour uses a bus that could previously carry up to 45 people, but now takes only 28 for maximum comfort. 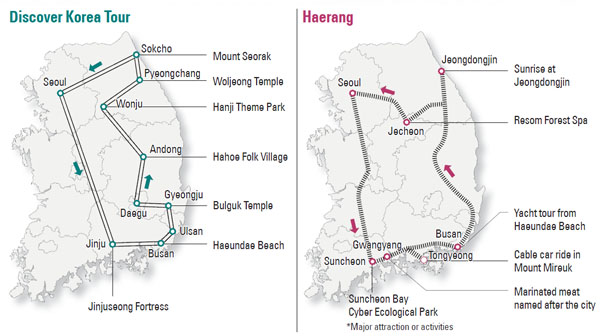 Korail has also renovated its trains instead of bringing in new ones. The company has set up different themed carriages - some to sleep in, some for a cafe, and some as entertainment areas with karaoke machines or tablet PCs. Musical performances or quizzes for larger groups are also often held on the train, and wireless Internet is available to keep travelers entertained.

The most striking part of Hana Tour’s package is the hotels it books. It aims to have its guests stay at five-star accommodations, such as the Westin Chosun Busan or the Hilton Namhae Golf and Spa Resort, when available. If a city that the guests visit does not have five-star lodging, the tour takes people to one of the best hotels in the area.

Haerang offers a yacht tour in Busan (left) and Travelers on the Discover Korea Tour look around Woljeong Temple in Pyeongchang Gangwon.(right)

The JoongAng Ilbo reporter chose a package that included a stay at Novotels in Busan and Daegu, and the Intercontinental Hotel in Pyeongchang County, Gangwon.

“These are hotels you would pay at least 150,000 won [per night] for if you were to make a reservation on your own,” said 76-year-old traveler Lee Cheong-hun.

“I’m traveling with this Discover Korea Tour package for the third time because it offers great places to sleep in.”

Haerang’s guests, meanwhile, sleep on the train. Although each room isn’t larger than 10 square meters (about 100 square feet), it has all the facilities a hotel may have - even a sofa. In the bathroom, guests have a shower and a bidet.

As the train moves to another city through the night, it is very time efficient. You can enjoy a beach in the southern part of the country in the evening and wake up to see the East Sea in Jeongdongjin, Gangwon, out of your window the next morning.

The most disappointing thing about going on the Discover Korea Tour is that it takes you to destinations that are already very famous, such as Bulguk Temple in Gyeongju and the Hanok Village in Jeonju.

It could be fun for first-time travelers, but it is not an exaggeration to assume that most Korean residents have already been to at least one of these places already.

Activities such as watching traditional musical performances or making crafts with traditional Korean paper are included, but they lack diversity and are far from new and fresh.

Unexpectedly, the most popular tour on this trip was at factories belonging to Hyundai Heavy Industries in Ulsan, which you cannot visit if you travel independently. Many elderly people in the group became nostalgic during the tour while remembering the past.

Haerang takes you to major travel destinations as well, but it prioritizes cities that have better rail connection. To get to hard-to-reach places, it guides travelers off the train and onto a bus. Haerang sets different travel routes each season. The one the reporter came on will be offered until February, but a new tour will start just in time for spring in March.

The most popular activity during this trip was yachting in Busan. The boat floated near the port area’s famous Haeundae Beach, allowing those on board to appreciate the perfect nightscape in Korea’s second-largest city.

Another opportunity the guests were satisfied with was a trip to the spa at Resom Forest in Jecheon. The 48,000 won spa treatment was the perfect end to the holiday. The travelers could relax their tired muscles here after spending three days away from home.

Both trips offer guests the chance to eat food specific to the regions they visit. The Discover Korea Tour goes for more expensive meals that are worth more than 20,000 won per person. In Daegu, guests had haesintang, or chicken and seafood soup, which is usually known for its higher price tag. One large pot of soup for four people costs 90,000 won there.

“We put about 12 different medicinal herbs into the soup, including ginseng, and we only use live seafood,” said 40-year-old Baek Min-ho, the owner of Gamnamujib, a restaurant that opened in 2008 and is renowned in the area.

After the meal, some of the guests said they were too full because they were given too much food. If the same sentiments pop up in the reviews, the organizer changes the restaurants for other trips.

“We survey customers, and if the service they get during their meals and the quality of the food become problematic, we change venues,” said Jo Il-sang, a manager at Hana Tour.

For people who prefer to have an unlimited amount of food on a trip, Haerang might be a better choice.

“Don’t blame us if you gain two or three kilograms,” service attendant Go Hee-young always tells guests on board the train.

The cafe operates from early morning until midnight, and cakes, fruits, coffee, wine and other snacks are all free.

Even at the restaurants the trip takes guests to, you will get more food than the times you go on your own. The tour organizer never haggles for the price for bringing groups of people to a restaurant, but it asks for additional one or two dishes.

When we were eating in Suncheon, South Jeolla, even though we were to be served with a set menu that comes with clams, the meal was served with a fish ship, and a stir-fried octopus, which was not stated on the menu.

All the restaurants Haerang chooses serve alcoholic and non-alcoholic drinks for free including beer, soju, and coke. Haerang also changes restaurants immediately if the overall reviews they get from travelers aren’t so welcoming.

The Discover Korea Tour is perfect for travelers who put sleep as their top priority. The company takes you to one of the most luxurious hotels in each region you travel. It also has 12 different routes ready so that guests can have more options to choose from to make their trip memorable. There are packages that start from Busan or Daegu, too.

However, signing up alone for this tour isn’t recommended because you can’t really eat alone at a restaurant. Food is usually shared between a table of four, so you will need to share with strangers.

The seven-day Discover Korea Tour costs 1.2 million won. The trip the reporter took was the four-day tour of the eastern part of the country that costs 650,000 won. All prices are inclusive.

The best thing about the Haerang train trip was the top-notch service. Six attendants on board take care of passengers 24 hours a day. Snacks are all free on the train and some of the service attendants present musical performances to entertain guests.

The only downside you can find here is the sleeping arrangements. Although each bedroom is decorated to the standard of a room you can find in a hotel, they are still relatively small and noisy because of the train’s sound. If you are fully aware of this and consider sleeping on a train a romantic part of travel, there shouldn’t be a problem.

The train tour costs around 1.2 million won per person. Prices are all-inclusive.