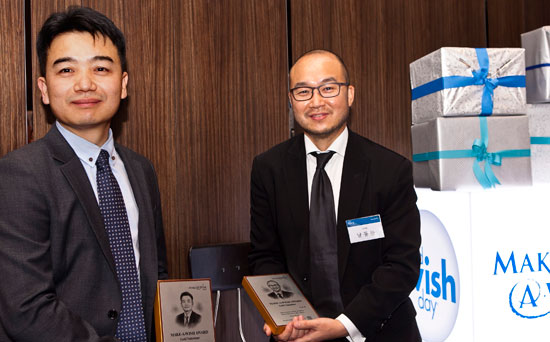 Kim Yeong-gyun, left, and Nam Dong-wan receive an achievement award from Make-A-Wish Korea on Nov. 21 in recognition of their 13-year devotion to the foundation and helping severely ill children. Provided by Make-A-Wish Korea

Children who suffer from terminal or life-threatening diseases might believe they have to leave their dreams behind. This is where Make-A-Wish Korea comes in, a foundation that dispatches volunteers to grant wishes for minors with life-threatening illnesses.

Since 2002, the helpers - or genies, as the foundation dubs them - visit sick children to listen to what they want.

Two genies, Kim Yeong-gyun, an employee at Prudential Life Insurance, and Nam Dong-wan, who works at NH Investment and Securities, have been at Make-A-Wish Korea since it began.

They are the sole founding members remaining at the organization.

On Nov. 21, Kim and Nam received an achievement award from the foundation in recognition of their efforts.

But the two said they have more than 80 children combined including their “wish kids.”

“When I switched my job to an insurance company from a different area, I received a lot of help from people and made up my mind to return that help to society,” Kim said.

“I applied to the foundation when I first heard that it was going to be built, thinking that I wanted to help those marginalized in our society,” said Nam.

Volunteers of the foundation organize teams to help at least four kids per year. It takes about three to four months to grant a wish for a single child.

Kim and Nam said wishes that are related to what children want to become spring to mind first when they are asked what their most unforgettable memories as genies are.

“A high school kid diagnosed with leukemia wanted to meet Seo Taiji [one of the most influential musicians in Korea]. But it took a long time to invite him because he was in the middle of making his new album,” said Kim. “The child finally met the musician, and now he has recovered completely. He became a guitarist.”

Nam told a story about fulfilling the dream of a high school girl who suffered from uterine cancer. She wanted to go to an amusement park with a K-pop group, Nam recalled.

“When I visited her, I found out that her ultimate dream was to become a singer,” Nam said. “So many people helped her to hold a small concert, along with releasing an album.

“She has recovered from the cancer now,” Nam said.

But being a genie isn’t always full of happy moments. They try not to contact the children after helping them achieve their dreams because it can be upsetting for volunteers when they learn a child they helped has died, Kim and Nam explained.

They both said they usually volunteer on weekends and are grateful that their families understand why they want to invest their time into helping these children.

“I came to understand my two daughters better when I started to interact and spend time with those terminally ill kids,” said Kim.

“I want to volunteer with my kids when they grow up,” Nam said. “For that, I guess I will have to be a genie for 10 more years.”