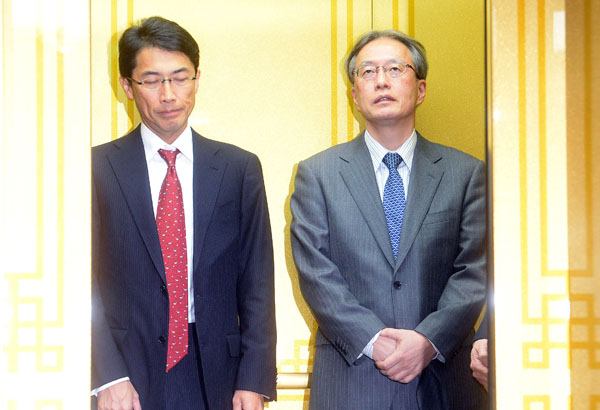 Junichi Ihara, right, director general of the Asian and Oceanian Affairs Bureau of Japan’s Foreign Ministry, gets on an elevator to the office of Korea’s Foreign Ministry on Thursday to have talks in Seoul over Japan’s sexual enslavement of Korean women during World War II. The fifth round of meetings on the wartime sexual slavery issue drew particular attention as it came after leaders of the two countries agreed last month to “encourage” the director general-level
talks to make progress on one of the thorniest bilateral issues. After the talks, a Foreign Ministry official said, “The two sides had in-depth and substantial discussions.”
The next round of talks will be held in Japan in December. [NEWSIS]