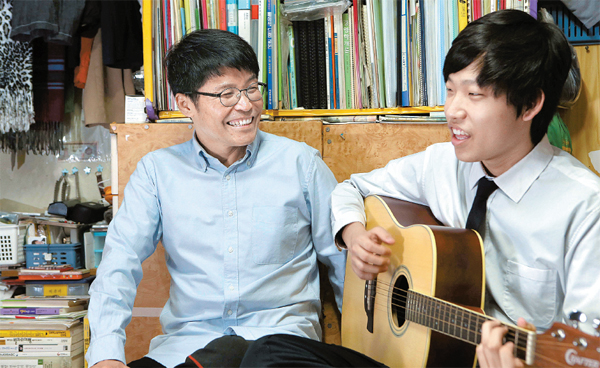 Kim Yeong-jun, left, a beneficiary of the Community Chest of Korea’s program Helping Hands of Life, smiles as he watches his son, who provided a liver for his transplant. By Oh Jong-taek

Kim Yeong-jun, a 46-year-old liver cancer patient, said he had taken very few days off during his life to spend time with his family. He said he had worked various jobs, from selling cars to ironing laundry, but he had to stop working after he developed cirrhosis in 2006. Last year, he was diagnosed with liver cancer.

Doctors told him that a liver transplant would save his life and his 18-year-old son, Hang-seop, volunteered to be his donor. But the family had no way to fund the surgery. Because they own a car, they were not eligible for government medical assistance.

Instead, a social worker for the family recommended they apply for the program Helping Hands for Life at the Community Chest of Korea. Two weeks later, the charity informed Kim that it will provide 20 million won ($18,000) for his surgery.

The transplant was a success.

“Because of my family, I didn’t give up on my life,” Kim said. “Because of the program, I have a new life.”

Many Korean families who are struggling still do not qualify for the government’s medical assistance program.

A mother and her two daughters living in Seoul’s Songpa District committed suicide together in February after suffering from health-related hardships. After the media widely reported the tragedy, a law to improve the service was submitted to the National Assembly and was passed through a subcommittee. But there are still many limits. The government’s plan to improve its financial assistance for major illnesses will most likely be implemented in 2016.

The Community Chest of Korea started its program at the end of last year to help low-income families pay their medical fees. The program applies to low-income households that are ineligible for government assistance because they barely surpass the income and asset standards or have estranged family members who have money.

The program helps people whose incomes are within 200 percent of the minimum standard of living and are suffering from cancer, major burns or rare diseases.

Four-year-old A-hyeon is another beneficiary who was able to regain her smile with the program’s help. Her family did not use a boiler to warm water because they worried about the bill, so they used to boil water on a stove instead. One day in February, Lee Eun-jeong, the girl’s 42-year-old mother, came home from work and put the kettle on. A-hyeon accidentally pulled the pot down from the stove, pouring boiling water all over her body.

Lee ran to a nearby hospital while her daughter was crying in pain. She suffered second-degree burns across her entire body and underwent major surgery, which cost 7 million won. Her ongoing burn treatment was expected to cost an additional 30 million won.

Even though A-hyeon’s father works day and night as a construction laborer, the family struggled to raise their three children. To them, the medical bill was a disaster. A-hyeon’s mother said the family could never have afforded the treatment if the hospital had not introduced them to the Helping Hands program.

A 36-year-old architect, who was diagnosed with blood cancer last year and received lung surgery, said the program saved him, too. His wife and three children returned to live with her parents and the family sold their house to finance his treatment, but the money was still not enough.

Because the architect’s parents, who are in their 80s, own a house, he was not eligible for government assistance. But Helping Hands offered him 20 million won and he is now going through rehabilitation.

Kim, A-hyeon and the architect are just a few of the people whose lives were changed by the program. According to the Community Chest of Korea, 9,497 people have received more than 28.02 billion won of assistance as of October.

“We want to do our best to play our role as civilian social welfare supporters in order to fill the void in the system,” said Kim Joo-hyun, secretary general of the Community Chest of Korea. “We hope to raise more funds and expand our program by easing our selection standards for beneficiaries.”

According to the organization, anyone can apply for the program and they do not need to be recommended by hospitals or social workers. The charity has signed a memorandum of understanding with the National Health Insurance Corporation so that more patients or their guardians can apply.

An evaluation committee at the insurance corporation reviews the applications and makes a decision within two weeks based on the premiums that have been paid, because they are often used as verification of income. Applications can be filed anytime from when a patient is admitted to a hospital to 60 days after they leave.

The Community Chest of Korea said it has actively tried to raise funds for the program, but the amount raised so far, 380 million won, is not enough to support all of its patients.