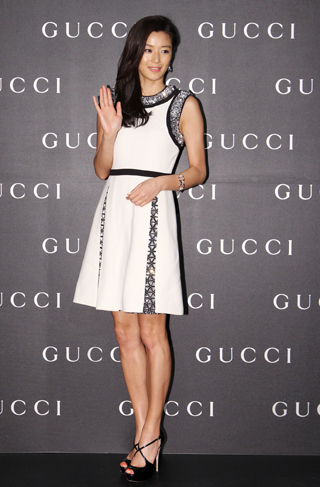 The most popular TV model of the year is actress Jun Ji-hyun, according to the Korea Broadcast Advertising Corporation.

In the 2014 Media and Consumer Research report conducted by the organization, the greatest number of respondents chose Jun as their favorite model of the year.

She earned 15.9 percent of the votes, while Suji, a member of girl group Miss A, ranked second with 6.8 percent and actor Kim Soo-hyun was third with 6.7 percent.

Both Jun and Kim were paired up in the hit TV drama series “My Love From the Star.”

Jun is currently endorsing numerous products including a beer, a social commerce website, a refrigerator, kitchen furniture and deep-fried chicken.

Having debuted in 1997 at the age of 16 as a cover girl on a fashion magazine, Jun has been a favorite of advertisers. But she also came under fire, with critics saying she focuses too much on her advertising work instead of her acting.

After she got married in 2012, however, Jun enjoyed a second acting heyday.

The 2012 blockbuster film “The Thieves,” which featured her, attracted 10 million moviegoers. Jun’s recent drama series “My Love From the Star” also became a sensation when the series was aired earlier this year.