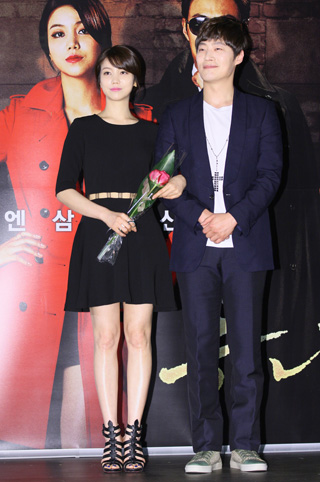 Actress Kim Ok-bin, left, and her on-screen love interest Lee Hee-joon, who paired up in the JTBC drama series “Yuna’s Streets,” are an item in real life.

According to the actors’ agencies, the two confirmed that they are in a romantic relationship on Monday. They have been together for about a month.

The two confirmed their relationship after a photo of the two in the streets of Prague was uploaded onto the web by an anonymous Internet user.

In the series, Kim played Yuna, who used to be a master pickpocket, while Lee played the role of Chang-man, an ordinary man in his 30s who lives in the same house.

Kim debuted in the entertainment industry in 2005 in the horror film “Voice” and has been starred in various films and drama series, including “Thirst” (2009) and “Over My Dead Body” (2012).

Lee started his career 15 years ago as a supporting actor and has been building up his resume in numerous films and television series.