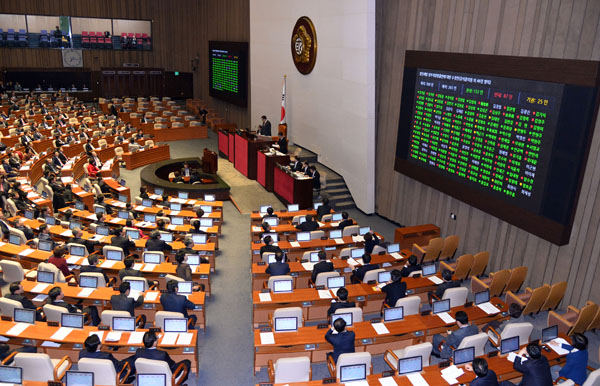 Lawmakers vote on bills at the plenary session on Tuesday in the main conference hall of the National Assembly in Yeouido, Seoul. [NEWSIS]

The National Assembly passed the 2015 budget at a plenary session Tuesday, the first time in 12 years that the squabbling conservatives and liberals managed to meet the Dec. 2 legal deadline mandated by the Constitution.

The governing Saenuri Party and major opposition New Politics Alliance for Democracy succeeded in ironing out their differences on details in tax-related bills that were part of auxiliary budget plans. The two agreed to expand tax cuts for purchases on credit cards and raise cigarette prices by 2,000 won per pack starting next year.

The meeting of the deadline for the first time since 2002 was largely due to the National Advancement Act that came into effect this year. It mandates that an unmodified budget bill proposed by the government be put to a vote at a regular session on Dec. 2 with or without bipartisan agreement.

That automatic vote, which would have been carried by the Saenuri’s majority, forced both parties to come to an agreement before the deadline.

Ironically, the National Advancement Act was designed to prevent the majority party from railroading bills through the Assembly. A contested bill can only be put up for a parliamentary vote when three-fifths of lawmakers, or 180, consent to it, which basically demands a compromise between the ruling party and opposition. But the act has the special Dec. 2 stipulation for the annual budget bill, which succeeded in forcing the parties to compromise.

Remarking on the bipartisan spirit displayed in the achievement, Saenuri Floor Leader Lee Wan-koo said after the agreement on the bill Tuesday afternoon, “No politician shall break the new tradition.”

The parties struck deals on a number of contentious budgetary matters.

The plenary session began at 7 p.m. and proceedings actually broke down at 7:50 p.m., when the fourth of 14 supplemental tax bills was put up for a vote dealing with cutting inheritance taxes. The Saenuri Party championed the bill and the NPAD has resisted it, since it largely benefits the affluent.

The bill increased inheritance tax exemptions for corporate heirs from shareholdings worth 300 billion won to 500 billion won. For tax exemptions, heirs used to have to work at the family company for 10 years. That would be cut to seven years. The vote failed and the two sides adjourned for 30 minutes. They returned and started moving the other bills.

One of the most contested issues was financial subsidies from the central government for a free day care program known as Nuri for preschoolers aged between 3 and 5.

Backtracking from an initial stance that local education offices should pay for the welfare program, the Saenuri agreed that 506.4 billion won would be allocated from the central government to help debt-ridden local governments go ahead with the expanded day care program next year.

The deal was considered a major concession by the Saenuri.

The parties also agreed to earmark 137.6 billion won on top of this year’s budget for basic welfare payments.

The other major agreement was to raise cigarette prices 2,000 won per pack, which the government hopes will become a new source of revenue for welfare programs. The opposition was afraid the price increase would hurt the poor more than the wealthy.

With the passage of the budget, the two main parties are now bracing for another round of negotiations on reforming the debt-ridden pension system for government workers, which has drawn strong protest from the civil servants’ union.