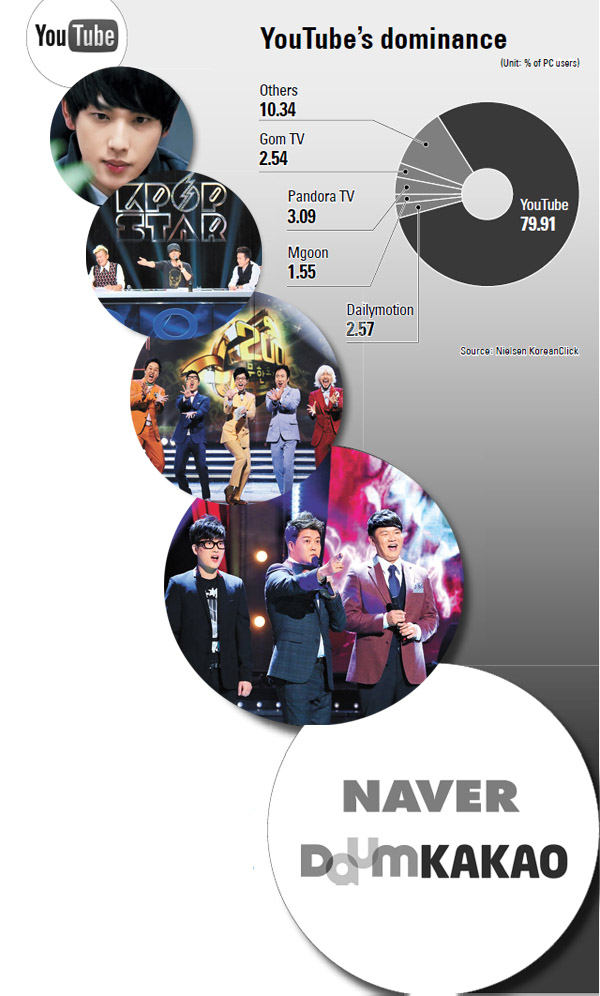 Major Korean broadcasters have stopped providing content to YouTube and joined hands instead with domestic platforms such as Naver and Daum Kakao. As a result, YouTube users in Korea cannot view shows such as (from top) tvN’s “Misaeng,” SBS’s “K-Pop Star,” MBC’s “Infinite Challenge” and JTBC’s “Hidden Singer.” [JoongAng Ilbo]

Along with the content of several major domestic broadcasters, they will no longer be available to view on YouTube in Korea.

This comes as Smart Media Representative, an association of seven television channels including MBC, SBS, JTBC, tvN and Mnet, declared that the broadcasters would not allow their content to be accessed on YouTube from Korean IP addresses as of Dec. 1.

“Since early this year, we asked that certain conditions in the contract be revised, but the demands weren’t accepted, and that is why we had no choice but to end the service of our content on YouTube,” an SMR official explained.

The conflict is mostly to do with money - the business rights of ads, profit sharing and distribution. Korean broadcasters have been demanding a larger share from YouTube because they believe their content is being undervalued and that the video website was receiving too much profit.

The estranged relationship is also a symbol of a power game between content providers, whose profits are eroding, and platform companies, which are increasing their influence day by day in the fast-changing media industry.

SBS, for example, posted a 19.8 billion won ($17.8 million) deficit in the first half of this year, despite high ratings from the World Cup.

SMR has chosen Naver and Daum Kakao as their content partners instead of YouTube. The broadcasters have been providing their shows to Naver TVcast since early November and to Daum Kakao’s TVpot from Nov. 27.

SMR, which MBC and SBS launched in June, is responsible for the broadcasters’ online entertainment, drama and documentary projects. This year, the cable channels JTBC, tvN and Mnet (operated by CJ E&M) joined SMR. As SMR represents one of the most powerful media blocs in Korea, the market is watching closely to see the repercussions of this change.

Naver and Daum Kakao allowed SMR to take 90 percent of the profits from advertising as well as the business rights of ads. In YouTube’s deal with SMR, the video website took 45 percent of the advertising profits. YouTube says this is a globally applied standard.

But observers note that Korea’s case is different because, unlike in most other countries, it has alternative platforms - such as Naver and Daum Kakao.

“In many countries, YouTube is their only option,” one insider noted.

“But in Korea, there are many other alternatives so [even without YouTube] viewers experience little inconvenience.”

Naver and Daum Kakao have also been very aggressive in attracting content to obtain the upper hand in the mobile market.

However, this is not the end of the relationship between the Korean broadcasters and YouTube, as sources say the company is still having internal discussions regarding what to do next.

Park Jong-jin, the head of SMR, said that Korean broadcasters plan to continue cooperating with YouTube.

“[We] are just calling for a structure where content makers demand their proper share to platform companies,” he emphasized.

Experts note that the two must find a compromise so that people can enjoy quality content through various sources.

“Companies should get what they want rationally, but in the long run they should find ways to coexist [with platforms] in harmony and collaborate in the global arena,” said Kim Seong-cheol, a media professor from Korea University.