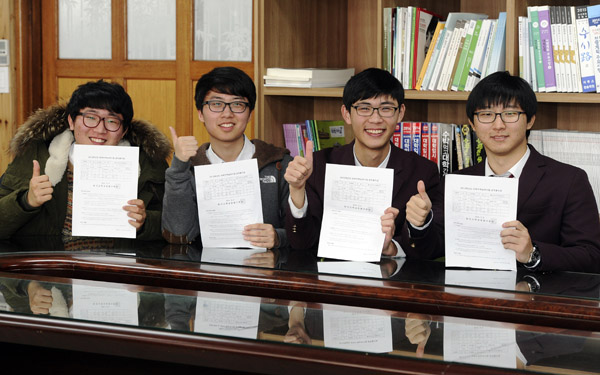 After all the anxiety surrounding the yearly College Scholastic Ability Test (CSAT), the official results from the Nov. 13 exam were released Wednesday.

And never has there been so much to celebrate.

So far, 12 out of the roughly 600,000 CSAT test-takers were reported by nationwide provincial educational offices to have received perfect scores on every subject.

And four of those students were from a single school in Daegu called Gyeongsin High School.

Answers for the CSAT are announced right after the exam, so students are able to predict their scores before they are officially reported by the Korea Institute for Curriculum and Evaluation (KICE), the government organization that oversees the administration of the CSAT.

But some students forget exactly what they answered - or aren’t capable of summoning the audacious hope that they got perfect scores.

Gyeongsin High School’s principal, vice principal and “every faculty member responsible for the 12th-grade student body” were unable for comment on Wednesday. An administrative staff member of the school said they were “all away for a celebration party.”

Han Ji-min, a senior at Pohang Jecheol High School in Pohang, North Gyeongsang, was one of the 12 students who received a perfect report card on Wednesday.

When asked how she feels in a telephone interview with the Korea JoongAng Daily, the 18-year-old answered with a thick Pohang accent: “I’m puzzled.”

“For three weeks after the CSAT, I couldn’t eat properly because I was afraid I might have mistakenly marked the wrong answer on the test. Now, it’s real!” she said.

“I didn’t cry though, because a news reporter was on the scene to take pictures of me,” Han admitted. “But my mom cried a lot when I told her the news.”

Han’s advice for her juniors in years to come as they prepare for the CSAT is to “stop haunting yourself with the fact that you’re a high school senior studying for the test, because that will only add more stress.”

One of Han’s teachers, Kwon Ki-hyun, 39, gave all the credit to her pupil.

“Not only is she really hardworking, but she’s also popular among her friends,” Kwon said. “She’s the vice class president. I’ve kept an eye on her for the past year, and what I’ve noticed is that she’s extremely focused during class. I’ve never seen her doodling.”

Han said she hopes to go to Seoul National University to study either politics or international relations.

Park Hyun-jun, an 18-year-old from Inseong High School in Gwangju, said his secret to receiving perfect marks on the CSAT was overcoming CSAT stress.

“It’s really important to let it all out,” he said. “In my case, I enjoyed playing basketball with my friends.”