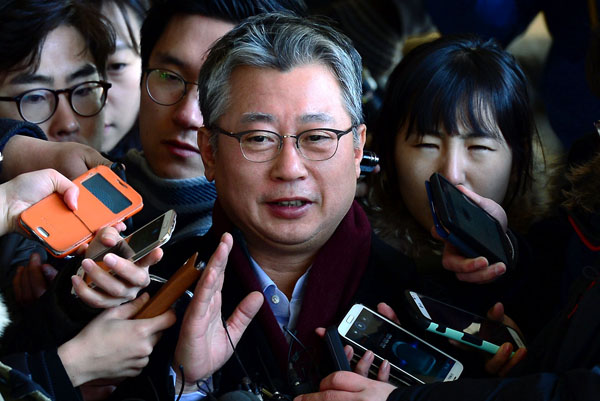 Cho Eung-cheon, a former secretary for civil service discipline under the Civil Affairs Office at the Blue House, talks to reporters before he enters the Seoul Central District Prosecutors’ Office in southern Seoul Friday morning. [NEWS1]

Park Gwan-cheon, a former official at the Presidential Civil Affairs Office who authored a document alleging that Chung Yoon-hoi, an ex-aide to President Park Geun-hye, was involved in pulling strings on political affairs behind the scenes, deleted numerous documents before his computers were seized, according to prosecutors Friday, including a report on corruption among government officials.

One file that Park, now a senior officer at the Dobong Police Station in northern Seoul, deleted from his computer a day before it was seized by prosecutors was confirmed to be an internal report on corruption of administrative officials, according to the Seoul Central District Prosecutors’ Office.

Park was summoned by prosecutors for questioning Thursday morning and was released early Friday.

The prosecutors’ office said that Park ordered a subordinate to delete the file from his computer at his current workplace, where he was suspected to have written up the document.

Prosecutors also said that Park had been deleting dozens of files before the computers at his workplace and home were seized, and that they were able to recover three deleted files, which also included a document on the Seoul Metropolitan Police Agency. Officials are investigating if these documents have a link to the report written at the Blue House.

Park’s boss when he was seconded to the Blue House, Cho Eung-cheon, a former secretary for civil service discipline under the Civil Affairs Office at the Blue House, was interrogated by prosecutors Friday amid allegations that he commanded Park to write the now notorious report on Chung.

He appeared at the Seoul Central District Prosecutors’ Office at 10 a.m. Friday and was expected to be grilled late into the night.

“I have dutifully carried out my responsibilities and never committed any acts that would be an embarrassment to my family or my subordinates,” Cho told reporters before entering the building by himself without an attorney.

“I will convey the truth as thoroughly as possible to the prosecutors.”

The internal report was written by the Office of the Presidential Secretary for Civil Service Discipline, a kind of internal affairs office for the Blue House that investigates corruption and irregularities throughout the government. The report was the result of an investigation into Chung, the shadowy former chief of staff to President Park, and his relationship with Blue House secretaries.

According to the report dated Jan. 6 by the Office of the Presidential Secretary for Civil Service Discipline, revealed by the local daily Segye Ilbo on Dec. 5, Chung led a group of 10 close aides to the president, including three presidential secretaries, who had regular meetings and secretly exercised influence on state affairs.

There is a likelihood that Chung will be summoned for questioning by prosecutors as early as next week.

In an email interview with the Chosun Ilbo on Friday, Yoo said that Park had called him to her office in August 2013, took out a notepad, and named the director general and a senior official of the sports bureau, calling them “very bad people.”

A day earlier, the Hankyoreh reported that senior sports bureau officials at the Culture Ministry were suddenly demoted last year because they led a probe into alleged preferential treatment given to Chung’s daughter in being selected as a national equestrian champion.

There have been allegations claiming Choi interfered in the Korea Equestrian Federation in the past and used his political influence to help his daughter’s sports career.

The Blue House promptly denied Yoo’s allegations that Park was involved in ordering the dismissal of the sports officials.

Presidential spokesman Min Kyung-wook said in a briefing Friday, “President Park on Aug. 21 of last year told former Minister Yoo that there needs to be more expeditious efforts in order to uproot evils in the sports world.” He said Yoo replaced officials as a result, but that personnel matters are the authority of the minister. In regard to the report that Park called the sports officials “bad people,” Min said that he could not confirm the president’s exact wording.