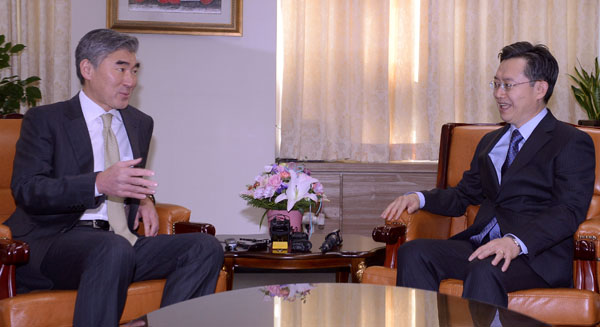 The new U.S. chief nuclear envoy Sung Kim said Friday that “it will be a mistake” to rush back to six-party talks before Pyongyang shows a serious attitude “toward a complete and verifiable denuclearization.”

Kim was on a visit to Seoul to speak with his Korean counterpart and other Blue House, foreign affairs and unification officials during his first visit to Northeast Asia since he took office last month as the special representative for North Korea policy in Washington.

Next, Kim heads to Japan and China, amid a recent flurry of bilateral communications among the six countries that are participants in the long-stalled talks to denuclearize Pyongyang. Those countries are the two Koreas, the United States, China, Russia and Japan.

Kim told reporters on Friday in Seoul that “North Koreans need to demonstrate their serious commitment to denuclearization before we can resume any negotiations,” a view in line with his predecessor’s policy, which Beijing views as too hard-line.

He said that his talks with Seoul’s top envoy to the six-party talks Hwang Joon-kook, special representative for Korean peninsula affairs, included “various aspects of the nuclear issue.”

Earlier this week, Hwang held talks with officials in Moscow on issues including the resumption of the six-party talks and Russian officials’ recent talks with Choe Ryong-hae, a senior Workers’ Party official.

Russian Foreign Minister Sergei Lavrov said after the meeting with Choe that Moscow has received “assurances” that North Korea is ready to return to the six-party talks without preconditions.

The six-party talks, launched in 2003, have been stalled since Pyongyang walked away from negotiations in late 2008.

While the United States is open to diplomacy for serious substantial discussion with North Korea, Kim said that Pyongyang has “shown very little interest in engaging us in a substantive matter on the important talks on denuclearization.”

But Kim said Washington continues to “enjoy a very strong five-party unity on how we should approach any resumption of nuclear negotiations and six-party talks.”

Kim was accompanied by Sydney Seiler, special envoy for the six-party talks, and Allison Hooker, director for Korea at the National Security Council.

Their visit marked Seoul’s first dialogue with the new Korea policy team in Washington amid a recent reshuffle in the U.S. State Department.

Kim, who finished his post as U.S. ambassador to Seoul in October, was named Nov. 6 as the new special envoy for North Korea policy to replace Glyn Davies. Kim also doubles as deputy assistant secretary in charge of Japan and Korea.