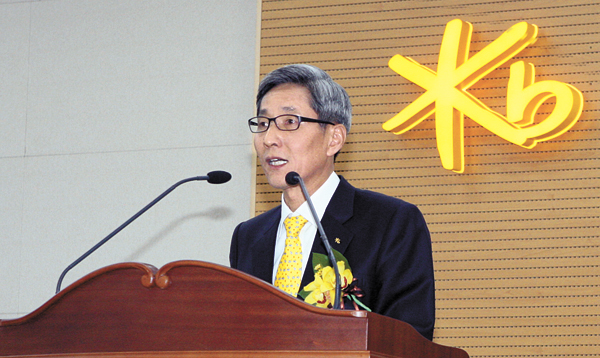 Yoon Jong-kyoo, the new chairman of KB Financial Group, gives a speech at his inauguration at KB Kookmin Bank headquarters in Yeouido, Seoul. Provided by the company

The new chairman of KB Financial Group, Yoon Jong-kyoo, is preparing the group to reclaim its title as the top financial company. He has set his priorities on earning back clients’ trust and boosting the morale of the company’s employees.

Yoon believes that customers are a fundamental asset to financial groups. The group’s public reputation was severely marred recently due to an internal feud that caused two of the company’s executives to step down.

“Due to recent events, we have learned our lesson clearly about upholding customers’ trust,” Yoon said in his inauguration speech.

“Without customers, we don’t exist.”

The chairman also pointed out that KB did not react quickly to market changes, which lead customers to leave. However, he also mentioned that KB, with its 1,200 branches and 30 million clients, overcame several critical moments and still has its “success DNA,” which consists of the drive to get over difficulties and cohesion with other members in the group.

Yoon also expressed his intention to transform business and marketing practices by tailoring services to each customer, whether they visit the bank or access services online. He said that by providing every client with the same high-quality service, the group can minimize client confusion when using KB’s services.

He also urged employees to reflect on the past crisis and bring changes to the company. Yoon especially stressed strong ethics in reforming the organization.

He plans to provide differentiated programs by reinforcing KB’s retail services, commercial investment banking (CIB), and virtual machine mobile banking services. He specifically called for expanding support for small and medium enterprises and small-loan finance services, which are the basics to a financial business. He also proposed to work with corresponding government policies to boost the creative economy initiative by increasing technology financing.

Yoon also emphasized that only through employees’ endeavors will KB become a top financial group once again. That is why he believes the company’s priority is to support workers’ morale.

He also requested changes in the management system. To allow more room for creativity and energy, he suggested reforming the group’s organization to give more autonomy to each branch. He said that the headquarters will support the leaders of each branch as CEOs who have the authority to manage the process in the field.

“Let us face a new challenge,” said the chairman.

“Together, let us make our dream come true - to regain our glory as the top financial group.”