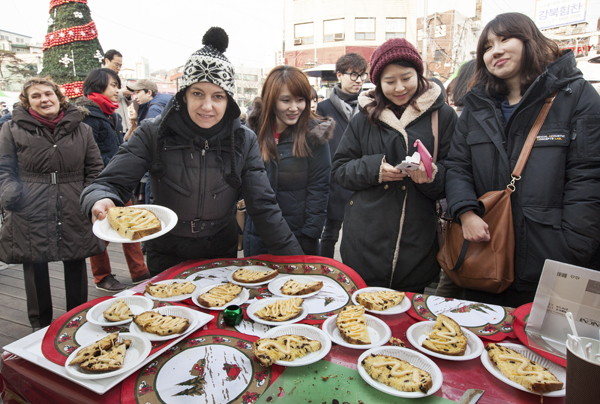 If the ubiquitous decorated trees on the streets are anything to go by, the Christmas season has arrived, and with it comes an array of festive fairs.

The continental market has been held since 2010. It was originally organized by German Hans-Alexander Kneider, honorary mayor of Seongbuk-dong.

“Christmas is the biggest holiday in Europe. I know it also has become a big event in Korea yet it is little bit different,” said Kneider.

“We [Europeans] hold markets at plazas to share some food and decorations for Christmas.

“I wanted to share European culture with Koreans so I brought some German foods and it became the origin of this market.” 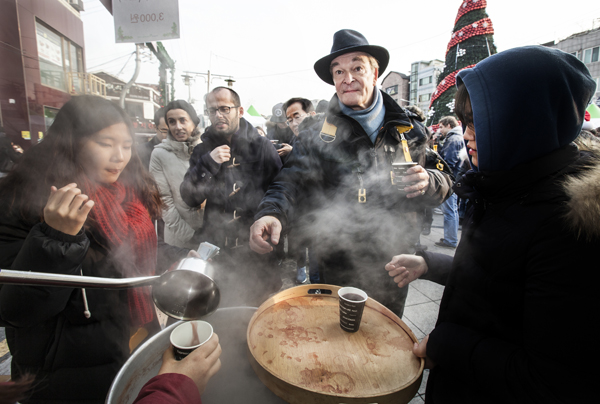 There are 38 embassies in Seong-buk District, where the market was held, and others from Europe became interested in joining as a result.

“They thought it was a good opportunity to introduce their nations’ traditional Christmas events and unite people,” said Grace Choi, the market’s organizer.

Bakers from the Grand Hilton prepared stollen, traditional German bread made for the Christmas season, and a gingerbread house for a charity auction.

But the festival is not just for food lovers. Seongbuk Global Center invited DJs, a bagpiper, rock bands and street musicians to entertain the crowd. It also prepared a prize for the person with the best Christmas outfit at the fair.

Visitors from various nations gathered at the event.

For Koreans, it was a good chance to experience Christmas from a Western perspective while giving Europeans an opportunity to enjoy their own culture.

If you missed the European market, another opportunity to enjoy Christmas with an international ambience is coming to Seoul from Dec. 19 to 25. 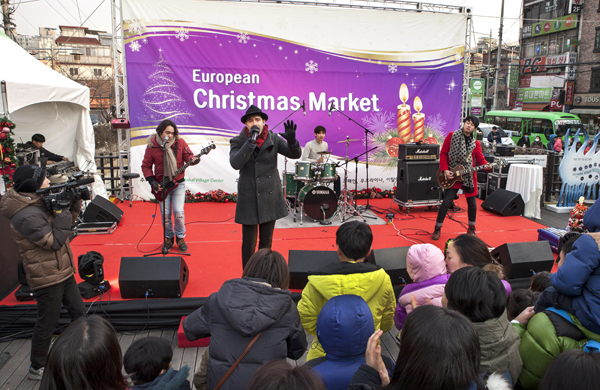 The rock band Cannibal Heart sings on stage at the European Christmas market.

Global foods such as vin chaud (warm wine), French crepes, British cakes and Japanese strawberry mochi (a sugary treat) can be found at the festival.

Handmade seasonal gift shops and design stores have already registered to sell their goods at the second edition of the festival.

And the organizer has invited musicians and artists for the celebration.

The performances will be held from afternoon to nighttime (around 2 p.m. to 10 p.m.)

Renowned singers, including Heo gak and Choon-ja, have been chosen to perform at the event.

In addition, diverse activities such as decorating a Christmas tree, taking snapshots in a photo zone and dancing are scheduled to entertain visitors to the festival.

If candy canes comes to mind when you imagine Christmas time, you will love Kintex’s confectionery fair in Ilsan, Gyeonggi.

Ninety-nine small bakeries and individual patisserie have registered for the seasonal fair this year. 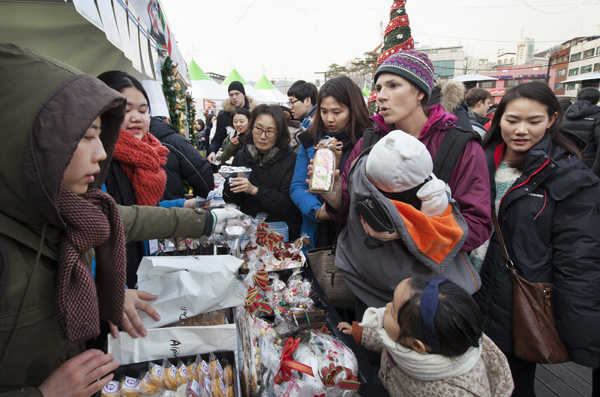 As well as renowned snacks such as candies, chocolates and macaroons, fusion foods are also on offer at the event.

Under the concept of Christmas, bakers will show off their skills throughout the fair by creating unique and novel desserts.

Behind on your holiday preparations? Then head to the Korea Christmas Fair.

The event, which is also held at Kintex, gives visitors an opportunity to prepare an all-in-one kit to survive the party season.

Christmas-themed decor, party wares, gifts and travel packages are ready to be picked up at the event.

Carol performances, a Christmas cookie bakery class, tree decorating events and gift-wrapping lessons will also be provided by the fair.