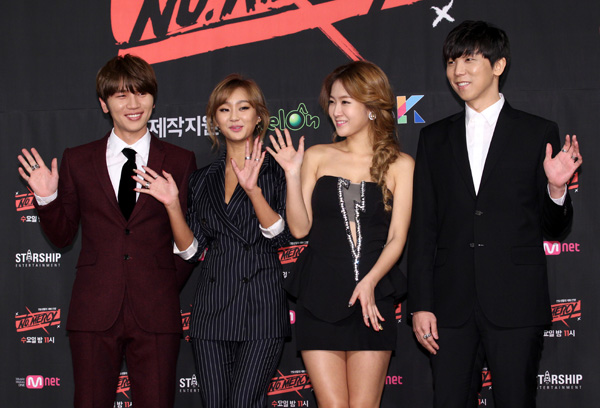 Starship Entertainment has announced it will put together a new hip-hop group as part of a televised audition show.

The music agency, which is home to singers like K.Will and girl group Sistar, has joined hands with cable channel Mnet to launch the program “No Mercy,” where trainees from Starship will compete for an opportunity to debut as an all-male hip-hop band.

The program will include 12 trainees who have been training for two to six years at Starship.

In terms of format, the program is trying to veer away from existing survival shows by ranking contestants from one to 12 for each round in order to make it more competitive. The show will present several interesting and provocative scenes related to the numbering system, according to a producer of the show, Yoo Il-han.

Yoo added that one of the program’s biggest strengths is that the contestants will collaborate with experienced hip-hop artists such as Junggigo, Mad Clown and San E.

The performances will then be released through local music outlets.

Male vocalist K.Will (left in the photo) and Hyolyn of Sistar (second from left) will be part of the show’s main judging panel.

“As [the potential group members] went through a long period of training, I didn’t put their basic skills on the agenda [when judging] but carefully watched to see if they knew how to put on a good performance for their viewers,” said K.Will at a press conference on Monday.

“I first participated in the show thinking that I wouldn’t scold these boys because I have been in their place as a trainee, too,” said Hyolyn. “But I changed my mind and just poured out advice and said harsh words to them, thinking it would be the best for them in the future.”

When asked at the press conference about having one of the youngest judging panels among audition programs that typically invite experienced musicians such as Park Jin-young, Yang Hyun-suk and Yoon Jong-shin, the show’s chief producer Choi Seung-joon, said, “These singers [judges] have been trainees before so they know how well the contestants can do and how they can get lazy behind the scenes. Thinking of this as a yet-to-be-created boy group who will represent the company in the future, they are taking this seriously.”

The first episode of “No Mercy” airs Wednesday at 11 p.m. on Mnet.