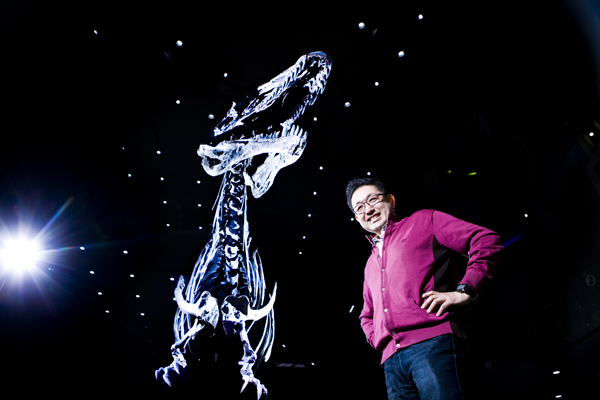 Paleontologist Lim Jong-deock poses in front of a carnivorous dinosaur’s skeleton at the Seodaemun Museum of Natural History in northwestern Seoul. [JoongAng Ilbo]

Finding part of a dinosaur footprint or a few of its bones is very much welcomed by paleontologists, so experts were thrilled when an entire fossilized skeleton was discovered last month in Hadong County, South Gyeongsang.

The Cultural Heritage Administration of Korea confirmed that the remains - the first to be found in the nation intact with a skull - belonged to a carnivorous dinosaur.
The discovered dinosaur is petite, measuring 50 centimeters (19.6 inches) in length, but regardless of its size it is helping local experts to find traces of Korea from about 110 million years ago.

One of these paleontologists is Lim Jong-deock, chief curator of the National Research Institute of Cultural Heritage.

Lim, who was on site in South Gyeongsang throughout the excavation process, still seemed excited about the discovery during an interview with the JoongAng Ilbo, an affiliate of the Korea JoongAng Daily, recently. His dream to restore the outline of an indigenous Korean dinosaur is about to come true.

Korea now has three dinosaurs that have been recognized by international academics, including the Koreanosaurus and the Koreaceratops Hwaseongensis, which experts judge to be from the Cretaceous period of the Mesozoic era.

The Pukyongosaurus, which is estimated to have lived in the same period, was also found after some of its bones were discovered in 1998.

The chief curator, who earned his doctoral degree in spine paleontology from the University of Kansas, has been considered a pioneer in dinosaur studies in Korea. 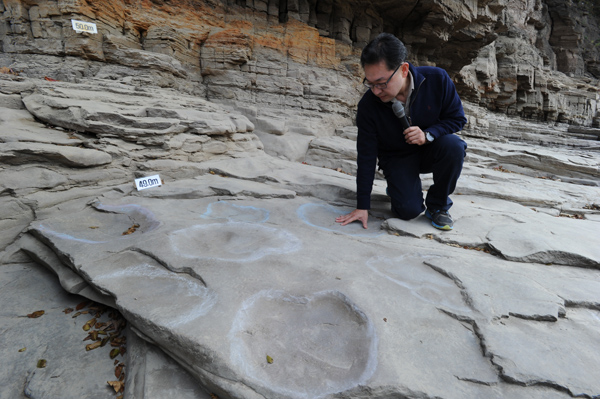 Q. Why is this recent discovery important?

A. The fossil is so clean cut because the dinosaur died in a very good condition, so it gives us a chance to learn more about indigenous Korean dinosaurs. Take a look at the Korean-made cartoon character from “Baby Dinosaur Dooly.” It was created when we didn’t have much academic background on local dinosaurs.
The character’s shape was created based on some footprints or part of a skeleton that had been found. Strictly speaking, these [animated] recreations cannot be considered Korean dinosaurs. It is more like putting the face of foreign dinosaurs onto a body that can be assumed to be ours, because until now, Korea has never found any fossils of a dinosaur’s head.

Is it important to have a dinosaur that we can say is from Korea?

I’m not trying to be a nationalist here. Dinosaurs can provide endless cultural content. They can spawn many other value-added products such as toys, video games or animations. If I were to give the example of soccer, people enjoy watching games with Lionel Messi or Cristiano Ronaldo, but they also feel delighted to see Korea’s own Son Heung-min. I’m just delighted to be part of a project that can create some content for Korea in the field of dinosaurs.

A recently discovered fossil of a carnivorous dinosaur in Hadong County, South Gyeongsang.

Does it matter that this particular dinosaur seems to be smaller than others?

The reason we are so fascinated with dinosaurs is because they are huge. [That’s why] many of the big-name natural history museums have a dinosaur displayed in their lobbies. On the other hand, smaller dinosaurs are rare. They are therefore more precious because they can be sources that can change the research paradigm on dinosaurs. The more we work on the fossils, the more it looks like they are from two dinosaurs intertwined with one other. It looks like they were about the same age. There are still several more things to figure out, to see if they were a part of any group of dinosaur, if they are brother and sister, what they ate.

Look at foreign books on dinosaurs: most introduce dinosaurs from America or Europe. None of Korea’s indigenous dinosaurs are recognized globally. The reason I came back to Korea in 2002 after working at a natural history museum in Kansas and applied for a job at the National Research Institute of Cultural Heritage in 2006 after working as a professor at Seoul National University was because I wanted to contribute to upgrading our national status in paleontology.

Was it difficult to get where you are now?

I actually graduated from Sungkyunkwan University’s biological science department. I wanted to major in underwater creatures. I was ready to study abroad. When I was a junior in college, I saw a dinosaur skeleton for the first time at the National History Museum in London during winter break in January 1990. I felt a shiver. I felt like everything around me just stopped at that moment. Until then, I only thought of dinosaurs as things that exist in the imagination. I had rarely learned anything about dinosaurs and I had barely heard anything about them. It just changed my life.

Did you get more job offers with better conditions in the United States?

I put my very best into excavations and writing theses, but they were all about dinosaurs that were indigenous to the United States. I couldn’t satiate my thirst for finding fossils indigenous to Korea. I wanted to deliver what I had learned to other students and researchers in Korea so that followers of the field could study in a better environment. But many people still looked stunned when I said I wanted to go back to Korea.

Do you regret choosing to work for the government?

The figures of two dinosaurs named after Korea. Far left is Koreanosaurus and left is Koreaceratops Hwaseongensis. Both lived in the Cretaceous period of the Mesozoic era.

Never. Maybe I could have been living more comfortably financially, but I would be living a predictable life teaching students and writing a thesis. When I saw the job ad from the Cultural Heritage Administration of Korea looking for a natural history expert who holds a doctoral degree, I applied immediately. I am the first person to explore this field and am on site for about 100 days a year.

What have you been doing since you came back?

The entire country is like a natural history museum that doesn’t have a roof. It was a paradise for dinosaurs. Korea especially shows excellence in having numerous dinosaur footprints or preserving them. In many cases, foreign researchers come to Korea to study fossilized footprints. There are more than 100 sites reported to have fossils. Korea has the world’s largest pterodactyl footprint [35.4 centimeters long, found in Gunwi, North Gyeongsang] and the smallest footprint of a carnivorous dinosaur [1.27 centimeter long in Namhae, South Gyeongsang.] The excitement and joy we felt when we discovered these is inexplicable. It is very much like a treasure hunt.

Why is it difficult to find dinosaur fossils in Korea?

There are two reasons. First, many of the bones are broken or have melted down due to volcanic explosions. Second, there are not enough specialists who can research the issue.
There are only five to six specialists who study paleontology, including myself. There are more than 300 in China. It might be more accurate to say that there is no researcher who can find fossils instead of saying that no dinosaur skeleton exist in Korea. Our level of research also lags compared to that of the United States, Japan or China. It is clear that there are many dinosaur fossils all across Korea waiting to be discovered. I’m sure we can find more complete fossils in the future.

Does it cost a lot to study dinosaurs?

My family of three lived on 1 million won [$901] while I was studying overseas. I got a scholarship to pay for tuition and I always bought the cheapest groceries. I bought oxtail bone and then ate soup for about a week. I guess I have an inextricable relationship with bones.

Is there any particular talent or ability a paleontologist should have?

You don’t really need to be smart. The key to do this job is to be patient and diligent so that you can develop your own way to watch out for and find things that no one else can.

Do you expect more people to join you in this area of study?

Research on dinosaurs is literally a blue ocean. Even if you start right now, you can get to the top tier. I don’t know why the majority of people rush to study medicine, law or business. You need to develop expertise in a lesser-developed area that not many people choose.
For example, we need illustrators specializing in science as it is essential to have them when writing medical or biological dissertations. But there is no one in Korea who does that work. My father used to work for a conglomerate and it was difficult to even see him because he would always come back home late. Since then, I have had the idea that I wanted to pave my own way to building a career.

What plans do you have for the future?

There are about 10 natural history museums in Korea but they are all very small in size. I’m preparing to open a national natural history museum by 2021. I have been collecting fossil samples or other rocks that can be displayed at the museum. How awesome would it be if we could have a dinosaur indigenous to Korea at the center of the museum?
Until I continue working as a civil servant, my dream is to provide a cultural place where everyone come and enjoy. I also have hosted an educational program called “Visiting Science Class” for children from low-income families or people with mental disabilities about 100 times. I think I want to continue doing this even after I retire as I believe education is the answer. That is also the reason why I have published many children’s books.