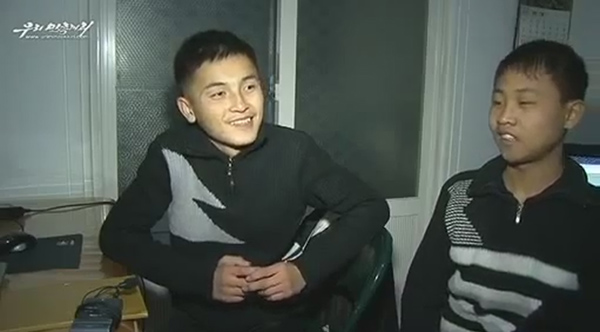 A North Korean propaganda TV network has aired a program featuring, by all appearances, the supposedly happy lives of nine young defectors who were repatriated last year from Laos.

The video emerged amid increasing questions in South Korea about the fates of the children and rumors that some of them may have possibly been executed.

On Sunday, Uriminzokkiri TV aired a report entitled “The Life of Nine Youngsters After Their Return From Abduction by South Korea,” an update of sorts on the group, who managed to escape from the North but were subsequently captured in Laos and repatriated in May 2013.

In the report, the North claimed that the youngsters were living a happy life and had received top-notch education since their return. Uriminzokkiri TV is a propaganda arm of North Korea’s Committee for the Peaceful Reunification of the Fatherland.

The nine orphans became the subject of an international media frenzy last year when they were repatriated to their communist homeland. They escaped to China and made their way to Laos, where they were captured and detained by immigration authorities.

Although the Laotian government originally expressed its intention to grant their wish to go to South Korea, it later changed its position and deported them to China.

Pyongyang’s active intervention was reported to have been the primary reason for their return, while South Korean diplomats’ attempts to interview them during their 18-day detention in Laos failed. From China, the group was forcibly sent back to North Korea.

About a month after their repatriation, they appeared on North Korean TV and claimed that they had been kidnapped by South Korean authorities but subsequently saved by the North. They all claimed they were warmly welcomed back home.

Earlier this month, South Korean media reported that two of the nine youngsters were executed while the rest were sent to a political prison.

Park Sun-young, a professor of law at Dongguk University and a North Korean human rights advocate, said she had heard from an informant inside the North that two of the nine were executed around August or September. The remaining seven were sent to the 14th Prison in Kaechon, South Pyongnam, she quoted the source as saying.

The North’s report aired on Sunday appeared to be in response to growing questions here concerning their fates.

The United Nations General Assembly will vote this month on an unprecedented resolution that will recommend that the UN Security Council refer the North’s leadership, including Kim Jong-un, to the International Criminal Court (ICC) for human rights abuses.

According to the Uriminzokkiri, the youngest four of the nine - Ri Kwang-hyok, Ryu Chol-ryong, Jang Kuk-hwa and Ro Jong-young - are studying at Kumsong Middle School. The school is an elite art and information technology institution in Pyongyang. The video featured the four students during lectures as well as their daily activities, their interviews and comments from their teachers.

In the interview, the students said they were happy to be studying at an elite school and that they were well treated. “Only one out of 10 gifted computer students can study here, but we are here,” Ro said in the interview.

The report said four others, including Mun Chol, were studying at another middle school and that Paek Yong-won was studying at the Hamhung University of Education.

Mun and Paek were the two defectors Park claimed had been executed. While the North shadowed the younger four in the report, it did not show the remaining five.

The TV program featuring the youngest four was titled as the first episode. It’s possible that North Korea may run more episodes on the group.