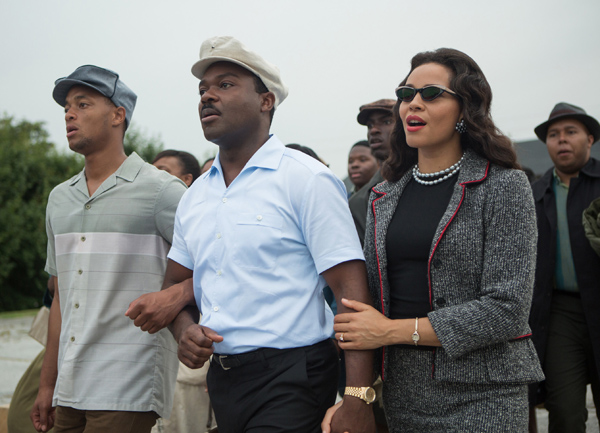 The movie earned nods for outstanding motion picture; lead actor for David Oyelowo; supporting actor for Andre Holland, Common and Wendell Pierce; supporting actress for Carmen Ejogo and Oprah Winfrey; and director for Ava DuVernay. Other films nominated for outstanding motion picture were “Belle,’’ “Beyond the Lights,’’ “Dear White People’’ and “Get On Up.’’

The civil rights group’s 46th annual awards show will be presented during a Feb. 6 ceremony airing live on the TV One channel. The awards honor diversity in the arts.

Viola Davis was the most nominated performer with three nods for her work in the films “The Disappearance of Eleanor Rigby’’ and “Get On Up,’’ and the TV series “How to Get Away with Murder.’’

Other nominees included best movie actor contenders Chadwick Boseman for “Get On Up,’’ Denzel Washington for “The Equalizer,’’ Idris Elba for “No Good Deed’’ and Nate Parker for “Beyond The Lights.’’

Outstanding actress nominees were Gugu Mbatha-Raw for “Belle,’’ Quvenzhane Wallis for “Annie,’’ Taraji P. Henson for “No Good Deed,’’ Tessa Thompson for “Dear White People’’ and Davis for “The Disappearance of Eleanor Rigby.’’

In addition to Holland, Common and Pierce, outstanding supporting actor nods went to Cedric the Entertainer for “Top Five’’ and Danny Glover for “Beyond The Lights.’’

Other nominees for outstanding supporting actress were Jill Scott, Octavia Spencer and Davis for “Get On Up.’’

On the television side, nominations for outstanding comedy series went to “black-ish,’’ “House of Lies,’’ “Key & Peele,’’ “Orange is the New Black’’ and “Real Husbands of Hollywood.’’

Nods for best TV drama went to “Being Mary Jane,’’ “Grey’s Anatomy,’’ “House of Cards,’’ “How to Get Away with Murder’’ and “Scandal.’’ The nominees for outstanding comedy series actor were Andre Braugher for “Brooklyn Nine-Nine,’’ Anthony Anderson for “black-ish,’’ Don Cheadle for “House of Lies,’’ Keegan-Michael Key for “Key & Peele’’ and Kevin Hart for “Real Husbands of Hollywood.’’

Outstanding comedy series actress nominees were Mindy Kaling for “The Mindy Project,’’ Niecy Nash for “The Soul Man,’’ Tracee Ellis Ross for “black-ish,’’ Uzo Aduba for “Orange is the New Black’’ and Wendy Raquel Robinson for “The Game.’’

Nominations for outstanding actor in a drama series went to LL Cool J for “NCIS: Los Angeles,’’ Omar Epps for “Resurrection,’’ Omari Hardwick for “Being Mary Jane,’’ Shemar Moore for “Criminal Minds’’ and Taye Diggs for “Murder in the First.’’ AP