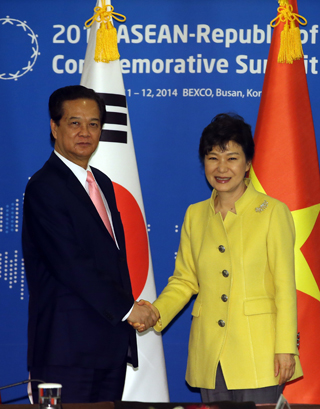 Vietnamese Prime Minister Nguyen Tan Dung, left, and Korean President Park Geun-hye, right, pose for a photo on Wednesday at a hotel in Busan before they have talks on a free trade agreement. [NEWSIS]

BUSAN - Korea and Vietnam agreed on the outline of a free trade agreement (FTA) after a summit Wednesday between the leaders of the two countries on the sidelines of the two-day 2014 Asean-Republic of Korea Commemorative Summit.

The deal that President Park Geun-hye and Vietnamese Prime Minister Nguyen Tan Dung signed is expected to allow Korea improved access to the Vietnamese market and was realized after 28 months of negotiations.

The FTA, which could become the 15th for Korea, would open the door to wider exports of such products as small vehicles, freight trucks, cosmetics and consumer electronics.

They are not part of the more expansive Asean FTA that became effective in 2007. The need for bigger trade opportunities grew as Korean enterprises have increasingly used Vietnam and its 90-million population as a production base.

Japan reached an FTA with Vietnam in 2009.

Earlier in the day Korea agreed with Malaysia to step up cooperation in the fields of construction projects in Malaysia including bullet-train railroads and oil refinery facilities in a summit between President Park and Malaysian Prime Minister Najib Razak at the Blue House.

The meeting marked the first in a series of bilateral summit talks scheduled on the sidelines of the Asean commemorative summit slated to kick off on Thursday in this port city.

“I am glad to see you again in Seoul after many encounters at multilateral summits,” said Park to Najib. “This is the first bilateral summit meeting [between Korea and Malaysia] since I was inaugurated, which is a little belated given the two countries’ close relationship. Given that, I wish the meeting could lead to achieving a firm mutual partnership.”

Park stressed that ever since the two nations forged diplomatic ties in the early 1980s, they have grown to become partners in various fields, including Korean builders’ participation in such mega projects as the Penang Bridge and Petronas Towers.

The Malaysian prime minister, who took office in 2009 after serving in various ministerial posts, told Park that both share a similar personal background. His father Tun Abdul Razak Hussein was his country’s second prime minister in the 1970s.

He added that Malaysia-Korea relations have been based on a “very solid economic partnership” and said he was sure the ties would not only be intensified but also diversified in the future.

The two leaders vowed to cooperate on a 400-kilometer (249-mile) railroad for a superfast train linking Malaysia and Singapore that will cost $13 billion won ($11.8 million). The construction will stretch from early 2016 until 2020. Countries around the world - including Spain, Italy, China and Japan - have shown interest in participating in the bidding scheduled for 2015 at the earliest.

A Korean builder that wasn’t identified is considering forming a consortium with a major Malaysian company, according to the Blue House.

The Malaysian leader also pledged to support Korea’s bid to join a $20 billion Malaysian state project to construct a refinery with the capacity to process 300,000 barrels of oil in the Johor Bahru region. Korean companies aim to take part in four parts worth a combined $3 billion.