SM signs an agreement with the KFA

SM signs an agreement with the KFA 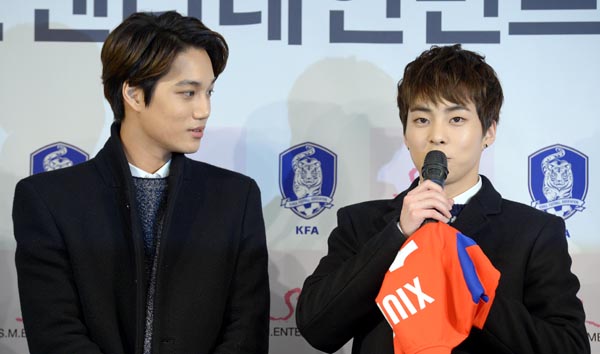 SM Entertainment, which manages musicians such as Exo, Girls’ Generation and Shinee, signed a memorandum of understanding (MoU) with the Korea Football Association (KFA) on Thursday.

Kai, left, and Xiumin, two members of boy group Exo, were present at the signing ceremony along with Kim Young-min, president of SM Entertainment, and Chung Mong-kyu, the chairman of the KFA.

SM Entertainment and the KFA agreed on the MoU to develop ties so that Korean football can gain ground with overseas K-pop fans.

“We expect the MoU would get K-pop fans interested in Korean football,” said an official from the KFA during the signing ceremony.

As part of the MoU, SM will compose cheering songs for the national football team and will stage concerts during football matches.

Kai and Xiumin received national football uniforms as gifts while an honorary employee card of the KFA was given to Minho, a member of Shinee, who is a football fan.