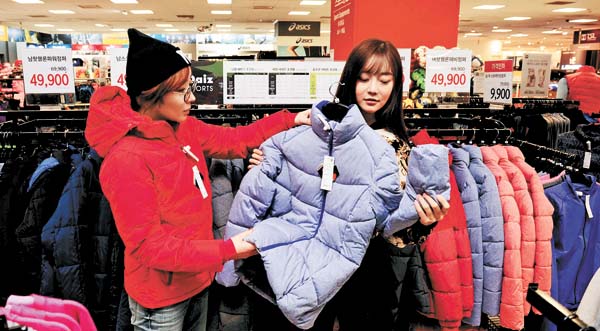 Customers look at E-Mart’s Daiz padded jacket made out of synthetic heat insulator Wellon at the retailer’s branch in Yongsan, Seoul. Provided by the retailer

Heavily-padded jackets, which were once so expensive that parents called them back breakers, have seen their price drop sharply and now sell for less than 50,000 won ($45).

A padded winter jacket from E-Mart’s fashion brand Daiz sells for 49,900 won, which is surprisingly cheap considering that the price of duck down that the jackets are stuffed with has gone up recently. The price of the feathers has surged roughly 70 percent because of the aviation flu outbreak in China in spring of last year. China supplies 70 to 80 percent of the world’s duck down.

So why are puffy duck down jackets available at such low prices? According to the fashion industry, it is because companies have been developing alternative heat preservation materials.

Companies usually secure feathers for winter jackets a year before they go on sale. 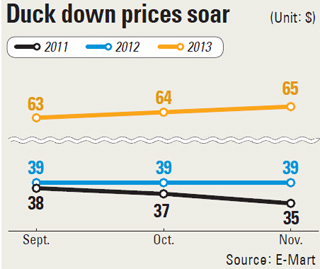 “Not only were the raw material prices expensive, but securing the duck down wasn’t easy either,” said Lee Jeong-woo, of E-Mart’s Daiz brand.

This year, the E-Mart fashion team decided to use a synthetic insulator made out of the polyester Wellon, which was developed by the Korean textile company Se Eun Tex Corp. Of Daiz’s 11 padded jackets, nine are now stuffed with Wellon instead of feathers.

Because it is a synthetic material the price is stable, unlike duck feathers. A kilogram of Wellon costs $3.80, which is much cheaper than down. Due to high duck feather prices, jackets stuffed with them have gone up 40 percent compared to the same period last year.

But because Wellon is much cheaper, Daiz has sold more than 10,000 jackets in just two months since its release. Sales of duck down lined jackets have seen revenues shrink 14 percent.

High-end outdoor brands are also starting to make puffy jackets with new heat insulating because feathers are expensive and have functional limits.

If they get wet from snow or sweat, feathers stick together in balls which makes the coat less warm. The feathers can also smell bad if they stay wet for too long. But synthetic materials can easily withstand the force of a washing machine and hardly changes when wet.

This winter, Mammut is selling a new Marangun jacket made out of a synthetic heat preservation material that it developed independently, called Ajungilak. North Face is also selling a VX slim jacket, which is made of its own synthetic material VX.

Still, many consumers believe that when it comes to heat preservation, duck feathers outperform synthetic materials. As a result some brands have used both instead of sticking with synthetic insulating materials.

The U.S. outdoor brand Columbia is selling a Mountain Yale Down Jacket with Omni-Heat insulation in parts where there is a direct contact with the skin and for heat preservation, the jacket is stuffed the jacket with down.

Lafuma’s FreshHeat Helios-2 uses synthetic material by 3M only in the sleeve and armpit area.