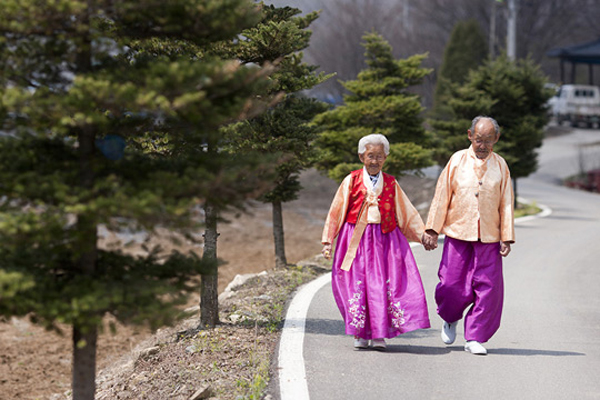 Documentary “My Love, Don’t Cross That River” was first on the weekend box office, pulling its three-week total to a record one million viewers. Provided by the distributor

A domestically made documentary film achieved a milestone over the weekend.

Director Jin Mo-young’s “My Love, Don’t Cross That River” pulled in 637,316 viewers and landed in No. 1 place amid a string of Hollywood blockbusters and big-budget flicks.

As of Monday, the story about an elderly couple - Cho Byeong-man and Kang Gye-yeol, who lived together for 76 years in the countryside, has pulled in one million moviegoers 20 days since it opened on Nov. 27.

In the indie film industry, a record over 100,000 is comparable to a commercial film hitting 10 million viewers, which explains the significance of the achievement.

Although the documentary depicts the love story of an old couple, 53.9 percent of viewers were people in their 20s, according to statistics from one of its distributors, CGV Movie Collage.

Due to the movie’s unexpected popularity, the number of screens it is being shown on has expanded from 186 to 806, the Korean Film Council said on Monday.

Currently, the film is the second most watched local documentary after Lee Chung-ryoul’s “Old Partner” (2009) which has a record 2.9 million viewers.

Ridley Scott’s biblical epic “Exodus: Gods and Kings” dropped two notches to the No. 3 spot with 346,345 tickets and made 11 billion won domestically.

Working Title Film’s “The Theory of Everything,” a part biopic and part love story about British astrophysicist Stephen Hawking and his first wife Jane Wilde, debuted in fourth place with 138,701 moviegoers selecting the film. It was followed by another British romance movie “Love, Rosie,” which opened in fifth place.