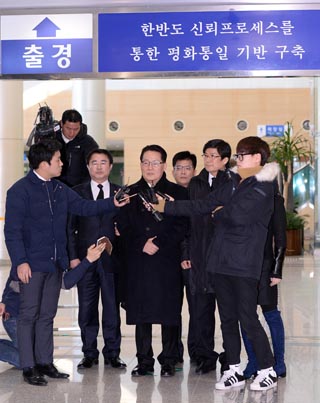 Park Jie-won, center, lawmaker of the main opposition party, speaks to reporters on Tuesday before leading a delegation to Kaesong to offer a wreath in memorial of the third anniversary of North Korean leader Kim Jong-il’s death.[NEWSIS]

Wednesday marks the third anniversary of the death of Kim Jong-il, the second generation dynastic leader of North Korea, and the end of the traditional Korean three-year mourning period for his son and successor Kim Jong-un.

Over the past three years, Kim Jong-un has mimicked the look of his beloved grandfather, founding leader Kim Il-Sung, and strictly followed some of the commands of his father, such as pushing forward the country’s nuclear weapons program.

The South Korean government and private North Korea experts said the time has come for the 31-year-old ruler to step out from the shadows of his grandfather and father and control the country in his own way.

The Rodong Shinmun, the mouthpiece of the Workers’ Party, said Sunday that the North has gone through a “sacred three years” since Kim Jong-il’s death. The newspaper detailed the major projects of Kim Jong-un and emphasized his declaration of a two-track policy to pursue both nuclear development and economic growth simultaneously. The newspaper suggested Kim is now fully in control of his country.

Pyongyang issued another report on Monday summarizing the major accomplishments by Kim during his first three years. Kim’s execution of his once-powerful uncle Jang Song-thaek last year was praised by the Korean Central News Agency as one of those achievements by Kim.

When Kim Jong-il died on Dec. 17, 2011, little was known about his youngest son and chosen heir. The North confirmed at the time that “Comrade Kim Jong-un, the great successor of the Juche [self-reliance] revolution and the excellent leader of our party and military” would be the new leader, confirming the third-generation dynastic succession.

Skepticism was high in the international community of a peaceful transition in the North Korean leadership. But over the past three years, Kim has managed to successfully tighten his grip over the country, albeit through ruthless purges and a generational change in Pyongyang’s inner circle.

The South Korean government, however, warns that the young leader’s long-term stability is still not assured as there may be fissures in Pyongyang’s power elite. The Ministry of Unification assesses that Kim is exercising a significant level of authority, but that he has a limits on being the absolute decision maker due to his lack of experience.

Over the past three years, Kim moved quickly to take over the highest positions in the Workers’ Party, government and military. After becoming the Supreme Commander of the North’s military in December 2011, shortly after his father’s death, Kim became the first secretary of the Workers’ Party and the first chairman of the National Defense Commission in April 2012. In July 2012, he was promoted to marshal, the highest active rank in the military.

He acted quickly to remove people who posed threats to his power.

While he recruited new associates such as Choe Ryong-hae and Hwang Pyong-so, Kim purged military leaders from his father’s generation, even some who participated in his father’s funeral procession. Chief of the General Staff Ri Yong-ho was one of those removed.

The highlight of Kim’s purges came last year when he executed Jang Song-thaek, the husband of his aunt Kim Kyong-hee, who acted as his guardian during his early days on the throne. Jang was executed on charges of high treason.

At the same time, Kim hired technocrats in their 50s and 60s to utilize their expertise and secure their loyalties.

To tighten his grip on the military, he frequently promoted and demoted military leaders and personally checked on soldiers’ readiness. According to the Unification Ministry, the minister of the People’s Armed Forces was replaced four times since April 2012. Over the past three years, he demoted 28 top military officers and reinstated 19 of them.

That pattern was clearly different from that of his father. Kim Jong-il spent the first three years of his rule upholding the will of his late father, Kim Il-Sung, while maintaining a rather low profile as the country’s “Dear Leader”.

North Korea also used its well-honed cult of personality to unite the public to support the young ruler. Youth groups were used in particular to provide backing and Pyongyang organized 38 national-scale mass gatherings of various organizations over the past three years, the Unification Ministry said.

The personality cult of the “Mount Paektu bloodline” played an important role to stress the legitimacy of Kim’s rule. The “Mount Paektu bloodline” refers to the descendants of Kim Il-Sung, the founder of the North, who reportedly led guerrilla activities against the Japanese occupation from the northern mountain. As a part of the personality cult of the Kim dynasty, the North repeatedly stressed the importance of keeping the country’s leadership based on the bloodline.

However, the Ministry of Unification said the Kim regime still has instability factors in the long term despite its various efforts to secure stability. The overgrown power of Pyongyang’s inner circle, the alienation of the public due to the politics of fear, the radical and short-tempered personality of the young ruler and possible power struggles in the leadership will encourage centrifugal action and eventually work against the unity of the regime, the ministry said.

Analysts said there is a high possibility that the North will announce a new leadership system that will symbolize the Kim Jong-un regime next year.

According to the Kyungnam University’s Institute of Far Eastern Studies, Kim Jong-un used the philosophies of Kim Il-Sung and Kim Jong-il over the past three years, but a new governing philosophy could be presented next year. Kim Il-Sung led the country under the “Juche” ideology, while the “military-first” policy was Kim Jong-il’s signature philosophy.

According to Lim Eul-chul, a professor at Kyungnam University, the announcement will likely be made to coincide with an important political anniversary on Oct. 10, the 70th year of the Workers’ Party’s foundation.

During the first three years of Kim’s rule, Pyongyang tried to diversify its diplomatic support, a change from his father’s time when the North heavily relied on its alliance with China. The Unification Ministry predicted that the new policy will continue in the coming years, while Pyongyang will refocus its ambition to create an opportunity to sit down for a bilateral dialogue with the United States.

Russia emerged as the North’s new key diplomatic partner and a high-ranking official, possibly Kim Jong-un, will likely visit Russia to mark the 70th anniversary of Victory Day next year on May 9. Victory Day was Nazi Germany’s capitulation to the Soviet Union on May 9, 1945.

The Kim regime will also work to restore deteriorated ties with Beijing, while continuing negotiations with Japan for political and economic gains, the ministry said.

If the diplomatic efforts fail to improve its isolation, it will hold out an olive branch to the South, the ministry said.

Over the past three years, the young ruler handled South Korea affairs with a bold but rather coarse approach. In October, he sent a high-profile delegation to the South and attempted to make a deal with the Blue House, but little progress was made to improve inter-Korean ties. The North also did not hesitate to make nuclear threats.

The Ministry of Unification concludes that the regime was more focused on political gains, such as protecting Kim’s honor from South Korean criticism, rather than economic benefits such as humanitarian aid.

While armed provocations including the firing of a long-range missile are expected, the Kim Jong-un regime won’t likely conduct another nuclear test due to opposition by both China and Russia, the ministry also said. The next test would be the North’s fourth, as a third test was conducted in February 2013. Kim’s decision to go ahead with the test despite China’s pressure not to do so angered Beijing and put a serious dent in the two countries’ decades-long alliance.

While the North continued to invest in arms, it has seen a limit due to international sanctions and economic hardship. The Kim regime spent $980 million on defense in 2012, 15.8 percent of the national budget. In 2013, it spent $1.04 billion, and in 2014, the budget was increased to $1.1 billion.

Kim will continue to order low-level military provocations against the South, while increasing asymmetrical attack capabilities, the ministry said.

In 2011, when his father was the ruler, there were only three violations of the western maritime border of the Northern Limit Line. The number went up to four under Kim’s rule in 2012. This year, there were 10 provocations in the waters near the border.

While his father made no field guidance visits at military drills in 2011, Kim continued to participate in soldiers’ exercises. In 2012, he attended three drills, 11 in 2013 and 24 this year. 