Chandler gets revenge as Mavs beat the Knicks

Chandler gets revenge as Mavs beat the Knicks 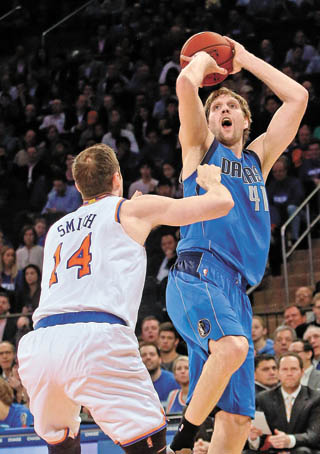 Dirk Nowitzki of the Dallas Mavericks shoots over Jason Smith of the New York Knicks during the first half of their game on Tuesday, local time, at Madison Square Garden in New York. [AP/NEWSIS]

Tyson Chandler started training two weeks after the last season ended, searching for a better result the next time he stepped on the floor at Madison Square Garden.

He got it. This time, he was on the right end of a Knicks loss.

Chandler had three dunks during Dallas’ sizzling start to his return to New York, and Dirk Nowitzki scored 16 points to help the Mavericks beat the Knicks 107-87 on Tuesday night, local time.

Chandler thought he would be back with the Knicks this season and started working out earlier than usual so he could help them rebound from the sour taste of their 37-45 finish. Instead, President Phil Jackson dealt Chandler to Dallas in his first big move, and left even the respected center wondering if he was the target after the Hall of Famer said the move was in part to address some of the team’s chemistry problems.

“I wouldn’t say there was any vindication, my whole thing is just I want to have a successful year,’’ Chandler said. “I feel like I’ve got a great opportunity with this team and I want to help lead this team to something special.’’

Chandler played a key role in the NBA’s highest-scoring team putting together a nearly unstoppable start that gave it the lead for good. Monta Ellis added 14 points and Chandler Parsons had 13 after missing a game with a sore lower back.

Carmelo Anthony scored 26 points for the Knicks. Tim Hardaway Jr. had 14 but was 5 for 17 in another poor shooting effort.

“They were ready to play from the start. We weren’t,’’ Anthony said. “We kind of got backed up on our heels and then we decided to come out and play and pick it up after that.’’

Shortly after hearing mostly cheers during introductions, Chandler dunked on a lob pass for the game’s opening basket. He threw down another alley-oop that gave Dallas 10 baskets in its first 11 shots.

Knicks Coach Derek Fisher yanked all five starters at once soon after, but the Mavs kept rolling, opening a 34-15 lead while sinking 13 of their first 16 attempts.

“I thought it was not the right way to start a professional basketball game,’’ Fisher said. “Those guys that were in there to start the game, that was a disappointment to their teammates.’’