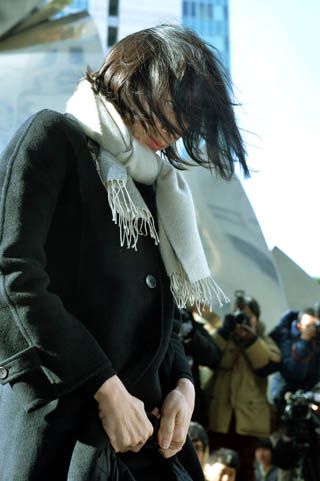 Cho Hyun-ah, the former vice president of Korean Air who earned international fame for indulging in nut rage in the first-class cabin of a plane in New York, was questioned by prosecutors Wednesday amid a growing possibility that she could find herself behind bars.

Standing before an army of reporters and photographers at around 2 p.m. Wednesday, Cho hung her head in shame and repeatedly said the word “Sorry” for the scandal that brought ridicule to her, the 40-year-old daughter of Korean Air’s Chairman Cho Yang-ho, and her family’s company.

Tears streamed down Cho’s face as dozens of reporters shouted questions at her.

Her appearance at the prosecutors’ office comes a day after the Ministry of Land, Infrastructure and Transport referred the case to prosecutors following its investigation into the incident on Dec. 5 at New York’s John F. Kennedy International Airport. It took less than two weeks for Cho to lose all of her executive positions in her father’s sprawling company, Hanjin Group, along with the prospect of being jailed for violating the Aviation Safety Act.

Ministry authorities confirmed Tuesday that the former vice president in charge of Korean Air’s cabin services did shout abusive language at flight attendants after she was served macadamia nuts in a bag rather than on a plate or in a bowl. Whether she inflicted any physical harm on crew members needed to be further investigated, ministry authorities said.

The key point in Cho’s questioning by prosecutors was to find out whether she physically abused the cabin manager and a stewardess, which Cho denied during the Transport Ministry’s questioning last week.

But her claim was contradicted by the cabin manager, Park Chang-jin, and a passenger in first class. Both asserted that Cho used physical violence against the flight crew by hitting Park on his hand with a plastic folder of a flight crew manual and pushing the flight stewardess in the shoulder.

Another important question for the prosecutors was whether Cho was behind the air carrier’s attempts to destroy evidence or coerce cabin crew members to make false statements about what really happened aboard Flight 86 from New York’s JFK Airport to Incheon Airport. The authorities already discovered such attempts by executive-level officials at Korean Air.

If Cho did play a role in destroying evidence or fabricating testimonies, it is likely that the prosecution will seek a pre-trial arrest warrant for her following the questioning, which was still under way as of press time Wednesday.

Cho made international headlines earlier this month when she delayed a flight bound for Incheon from New York after complaining about the way the macadamia nuts were served in first class. She forced the plane to return to the gate from the tarmac in order to have the cabin manager ejected.

The flight was delayed by 11 minutes.

Korean Air has not handled the scandal well. Its first official statement in response to the nuts-rage report was that Cho was within her rights to demand the proper in-flight services because she was in charge of cabin services as the vice president.

The nuts story has also drawn attention to the younger generation of families that control big business groups in Korea, known as chaebol, who often rise to executive-level ranks with little or no experience when they reach their 30s, which would take decades for ordinary employees.