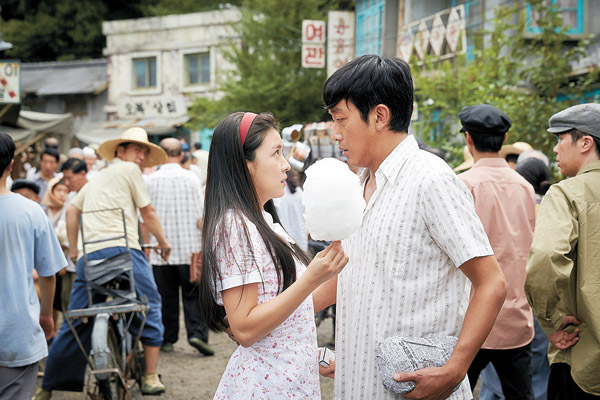 Guaranteed crowd pleaser Ha Jung-woo is working towards an ambitious comeback both as a filmmaker and an actor for the upcoming “Chronicle of a Blood Merchant” (working title), teaming up with some of the country’s top stars.

The movie, which opens in local theaters next year, is his second directorial feature after “Fasten Your Seatbelt” (2013).

Since Ha obtained the publication rights to adapt best-selling author Yu Hua’s novel, every part of the film’s production process has made headlines in Korea.

And the press has especially focused on the casting choices. The film is filled with A-list actors such as Ha Ji-won, Lee Geung-yung, Jeon Hye-jin and Cho Jin-woong, amplifying viewers’ anticipation for the feature as a result. 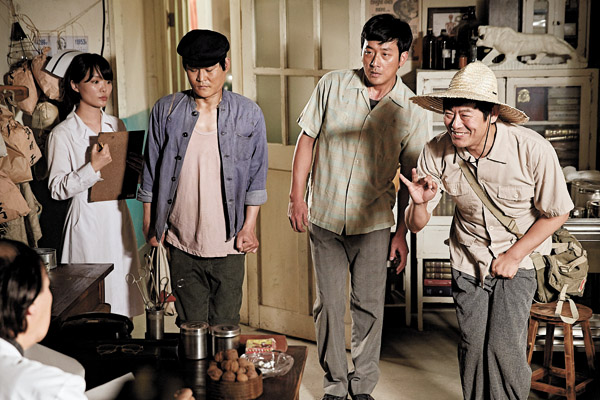 Actors Kim Sung-kyun, second from left, and Sung Dong-il, right, also feature in the film. Provided by the distributor

“This is my first time working with actress Ha, but the rest of the members are people I have worked with in the past,” said the 36-year-old filmmaker during a press junket held Wednesday at Apgujeong CGV in southern Seoul.

“I trusted these people to compensate for my shortcomings as a director because they have the competency to analyze their characters in their own ways.”

Ha revealed that he had flickers of doubts about having taken on such a challenging project during his pre-production preparations.

“While writing the script, I regretted selecting the work more than 12 times a day,” said Ha.

“I thought to myself that there were rightful reasons why people hadn’t adapted the novel until now.”

Ha explained that he filmed about 40 percent of the movie with a handy cam prior to beginning official shooting, as practice with a small team of staff.

However, despite his concerns, the actual filming process was smooth sailing.

“Before being a director, Ha had a base as an actor, so he really was attentive toward the actors’ situations,” said actress Ha. “The director took care of everything even before I could think of it. It was a really relaxing experience for me.”

The actors were also given room for creativity within their roles.

“Ha really emphasized that the actors were unrestricted. He liked it when I acted spontaneously and boldly,” said Jeon, who plays a sidekick in the film.

Part comedy and part drama, “Chronicle of a Blood Merchant” is set in 1960s Korea when the nation was in serious poverty. Ha Jung-woo plays Heo Sam-kwan who wins the heart of the most beautiful women in her village (Ha Ji-won).

Ha Jung-woo talks about his second directorial feature “Chronicle of a Blood Merchant” at a press meeting on Wednesday. Provided by the distributor

Heo may not be prince charming, marred as he is by his narrow-mindedness and high-tempered personality. But the newlywed humbly makes ends meet and the couple has three lovely children together. But as rumors about one of their offspring start to emerge, the two faces a crisis like never before. The film opens on Jan. 15.