Expert focuses on links with Russia

Expert focuses on links with Russia 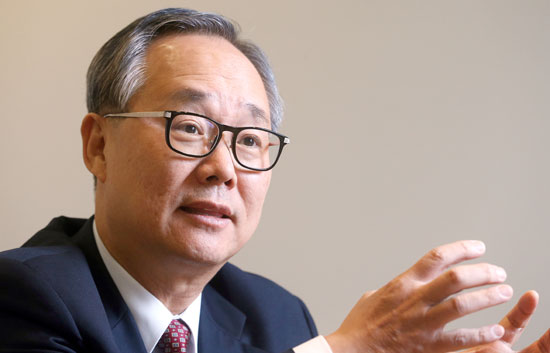 Lee Kyu-hyung, the former Korean ambassador to Russia, says next year will be important in upgrading the relationship between Korea and Russia when it comes to issues unrelated to government.

“Russia is a partner that can not only help our national security and maintain peace on the Korean Peninsula, but also help our economic development,” he said in an interview on Dec. 12 with the JoongAng Ilbo. “Next year, the 25th anniversary of diplomatic ties between Korea and Russia, I believe there will be real progress in our relationship.”

The KRD is a communication channel that is considered half public and half private, where experts across different fields gather for open forums.

Lee, a graduate of Seoul National University who specialized in diplomacy, became the chairman of the Coordinating Committee at the KRD last year at the group’s third forum, held when Russian President Vladimir Putin visited Korea.

This year, he has been busy with the KRD and held a joint seminar with the Korean Association of Slavic Studies. Earlier this month, the KRD opened a forum in Vladivostok and Moscow for university presidents and the media.

Lee expects next year to be even busier: It marks the 25th anniversary of diplomatic ties between Korea and Russia, while Europe will celebrate the 70th anniversary of the end of World War II. Plenty of events are already planned.

“Since Putin emphasizes developing the Far East and cooperating with Asian countries, Korea-Russia dialogue is about trying to set an example in nongovernmental areas,” he said.

The Busan native said the group is currently planning to expand exchange programs for university students.

“We’re trying to open a forum in Kaliningrad [in Russia] in late January with some 40 college undergraduates and graduate students,” he said. “It will be a stage for young people to discuss what can be done to improve the relationship between Korea and Russia and broaden their views through communication.”

As for cultural exchanges, Lee said there are talks to establish a statue of Korean novelist Pak Kyongni, best known for her work “Toji” (The Land), in downtown Saint Petersburg.

The career diplomat said the plan progressed following an exhibition and seminar on Pak’s works there earlier this month. According to Lee, Seog Young-joong, a professor and expert in Russian language and literature at Korea University, has already thrown her support behind the venture.

“Last year, in front of the Lotte Department Store in Myeong-dong, Seoul, a statue of Alexander Pushkin was unveiled, and our plan is to extend that work,” he said.