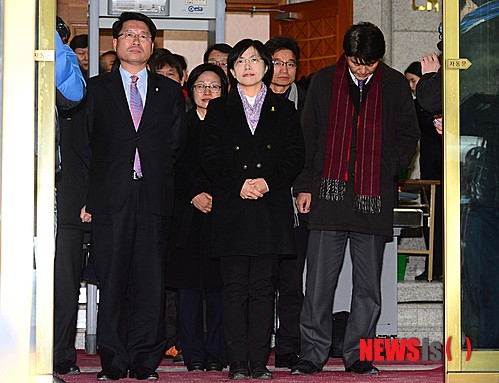 Korea's constitutional court on Friday ordered the dissolution of a small leftist political party hounded by claims of pro-North Korea views. Critics say the decision could worsen already deep political divisions in a country once ruled by military dictators, and trigger a fierce debate on authorities' limits in restricting freedom of expression.

The Justice Ministry petitioned the court to disband the Unified Progressive Party in November 2013, accusing the group of supporting North Korea-style socialist systems and posing a threat to South Korea's liberal democracy. The request was made two months after key party members were arrested for allegedly plotting a pro-Pyongyang rebellion to overthrow the South Korean government in the event of a war on the Korean Peninsula.

The disbanded leftist party was founded in late 2011 with a merger of small progressive groups, and has five lawmakers, all of whom, the court ruled, are to be deprived of their seats.

It is the first time the court has ordered the breakup of a political party since it was founded in 1988 to better protect basic public rights. In the late 1980s, South Korea was evolving into a genuine democracy following decades of military-backed dictatorships. Previously, authoritarian leaders, including current President Park Geun-hye's dictator father, arbitrarily dissolved parliament and political groups and banned party activities to suppress their rivals.
Party members have said they want only greater reconciliation with North Korea. They accuse the country's spy service of fabricating the rebellion charges to divert criticism over revelations that spy agents launched illicit online campaigning to help then ruling party candidate, now President Park, win elections in December 2012.
The rebellion charges led to the conviction of seven party members now serving prison terms of up to nine years for either inciting rebellion or violating the country's anti-Pyongyang security law.
The verdict will add to the criticism that Park's government infringes upon freedom of speech. It will also further aggravate a bitter political divide between the right and left.
Park's liberal rivals have said her heavy handed style is similar to that of her dictator father, former President Park Chung Hee, who ruled the country for 18 years until his 1979 assassination.
Much of South Korea's internal division is about how to view rival North Korea. The South has shared the world's mostly heavily fortified border with the North since their three-year war in the early 1950s. In South Korea, even praising North Korea can be punished with up to seven years in prison. [AP]