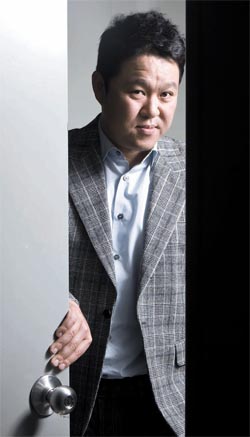 According to the agency, Kim began feeling short of breath and experienced a ringing in his ears at around 11 a.m. on Thursday.

He previously announced on his talk shows that he suffers from panic disorders.

“Kim was extremely stressed out and was also suffering from insomnia recently,” Line Entertainment stated in a press release. “We assume he is extremely burned out.

“He’s been taking medicine for his panic disorders over the past seven months, but his condition recently deteriorated and he was ordered by the medical staff to rest.”

After news broke that the 44-year-old television personality had been hospitalized, local media outlets reported that Kim had recently been notified by the court that all of his property would be seized due to mounting debts owed by his wife.

The agency has not confirmed the reports.

Six programs, including MBC’s “Sebakwi Quiz to Change the World,” “Radio Star” and JTBC’s “Sseol Jeon,” will temporarily be filmed without him.

The TV host first debuted as a comedian, receiving recognition for his foul-mouthed, straightforward comments.

Kim is not the only celebrity to admit he is suffering from panic attacks. Comedian Jeong Hyeong-don and producer Yang Hyun-suk, head of YG Entertainment, have also openly acknowledged their panic disorders.