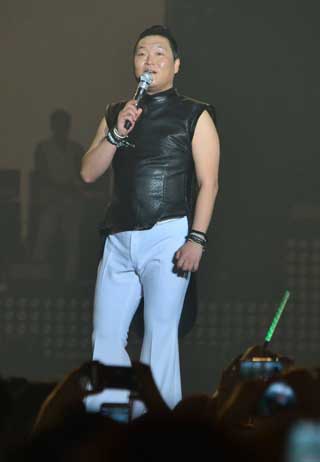 “A good song is created over the course of making a good album, but I realized I was trying hard to make a single hit [to live up to the expectations of the public after the hit of ‘Gangnam Style’],” said Psy.

“I promise I will not try to hit the jackpot with a single song next year.”

The singer-rapper was scheduled to release the digital single “Daddy” this year. He already finished shooting a music video for the song but suddenly postponed the release of the single, citing quality issues.

“I think I received too much attention and support from the public in 2012 and it took me nearly two years to get back on the right track,” Psy said.

“I will keep working hard as a musician this year. If one of my songs is beloved by people living in other countries like ‘Gangnam Style,’ I would appreciate it but if it fails to impress them, I wouldn’t mind and will keep doing my works as a musician.”

During the concert, Psy also dedicated “To My Friend,” one of his songs, to the late musician Shin Hae-chul, who passed away in October.

His annual year-end concert began in 2003 and is one of the best-selling shows around this time of the year.

Last year, “All Night Concert” attracted 60,000 people over the course of five shows.