On a city center sidewalk stretching from a subway station entrance to the nearest convenience store, at least two or three middle-aged women approach passersby with leaflets in their hands advertising a nearby restaurant, gym or academy.

In a situation like this two thoughts quickly flash across your mind: whether to take out your hands resting in your warm coat pocket or just turn the other way.

Receiving those leaflets would mean shortening their time standing outside in the freezing weather.

But taking them would also mean increasing the amount of trash being thrown away on the street. 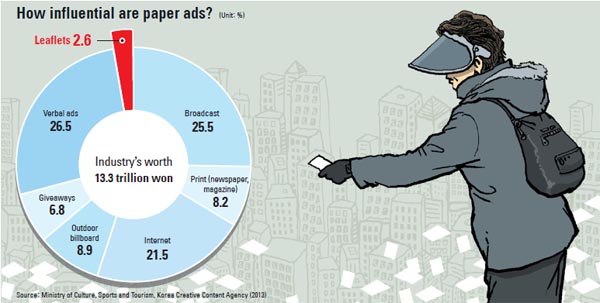 In a digital society where ordering take-out, grocery shopping and even browsing for houses to rent can be done through gadgets we can hold in our hands, do analogue advertising leaflets have any influence on us? And who are the consumers and the suppliers of these paper ads?

A JoongAng Sunday reporter, an affiliate of the Korea JoongAng Daily, had these questions in mind before digging deeper into the world of flyers, undertaking a one-day experience as a part-timer handing them out on the street.

The reporter visited eight businesses, ranging from restaurants to gyms, that regularly hand out flyers to pedestrians.

One was a lunch box delivery eatery that receives orders from nearby offices. The place, which is overseen by a 40-something male manager, seemed especially hectic during lunch time.

“I hand out about 200 flyers during morning rush hour three times a week. On the day the leaflets are distributed, the shop’s sales jump by 30 percent,” the manager said.

“The biggest advantage of the leaflets is that it makes sure that the customer has the name of our shop and the menu in their hands.”

The other seven stores agreed that the leaflets were the most effective means of promotion with the least amount of expense.

“Suppose we distribute 200 leaflets. It is profitable to us even if we have just three more groups of customers,” said one restaurant owner.

“The money we earn from one table compensates for the payment we give to the part-time ajumma [middle-aged women].”

Employees from gyms or yoga centers also agreed on the effectiveness of the leaflets.

Several said that around 80 percent of their first-time customer said they visited after receiving the flyer ads.

The leaflets are clearly influential. But where are they made?

In Euljiro-dong near Cheonggye Stream in central Seoul there is a partly derelict alley where printing houses have been concentrated since the early 1960s.

Although the demand for print has waned due to the decreasing popularity of books and newspaper, dozens of shabby printing houses lining the street are still in operation.

A printing house owner surnamed Jung, who has been running his shop for 28 years, seemed confident about the longevity of the business.

Although the quantity of orders decreased abruptly in 2000s, he expects the business to survive in the future.

“The number of orders cut in half after the year 2000. But, still, many customers find us, such as those who are newly opening restaurants, academies and also apartments that are looking for new customers and tenants, he said.

“I am certain that the leaflet business will last for a long time.”

The usage of these leaflets is very versatile. Some end up on walls or telephone poles and some of them are handed out directly to people on the street. The rest get inserted in newspapers or magazines.

Part-timers who distribute flyers on the street allegedly receive 8,000 to 12,000 won per hour, and 500 leaflets are handed out on average over two hours, or at least 200 per hour.

The JoongAng Sunday reporter went out on the street to spend a day in the life of a part-time worker handing out flyers.

The hour was so-called “golden time” because not long after the reporter found a spot to hand out flyers for a yoga center, office workers poured on to the street to get lunch.

However, despite the reporter’s persistent efforts to thrust the leaflets into people’s hands, people did not take them out of their pockets easily.

After she pawed the air four times, one male, who seemed to be in his 50s kindly received the flyer but shoved it into his pocket without looking at it.

For the next 30 minutes, the reporter’s attempts were in vain more than 100 times.

Some people who refused to receive the flyer nodded at the reporter, which seemed to be a gesture of apology.

After about an hour of struggling with the leaflets, an old lady who seemed to have been in the business for quite some time approached the reporter and told her to stand beside a crosswalk.

“You seem to be a beginner at this. This spot is sunny and all, but there are not so many people who come here. Try going there beside the crosswalk,” the lady said.

As a beginner, distributing 200 leaflets in an hour seemed impossible, so the reporter tried on an animal costume to lure more attention.

The outfit hindered her eyesight and slowed down her movement, but it worked. The reporter understood why some employers insist that their staff go out onto the street in goofy clothing.

People who previously would not have glanced at the reporter lined up in front of her to receive flyers while she was wearing a cute costume. Some pedestrians stroked her head as they passed by.

As a result, the reporter was able to get rid of a package of leaflets in half the time it took on her first try. People even took the time to look at what the leaflet was advertising.

After the tiring experiment, the reporter met a so-called veteran leaflet distributor who had more than 30 years of experience.

“Now, when I see people walking towards me, I can tell if they are going to receive it or not,” the veteran said. “Also, one of the tips that I can tell you is that if you hand the leaflet out folded in half, there is a better chance that people will care to receive it.”

One of the biggest downsides to handing out leaflets is the unnecessary trash. Half of the leaflets given out end up in a garbage can right away, or even on the streets.

The district’s administration center had to call the phone number written on the flyers to ask a representative of the business responsible to retrieve them.

“Once every few months things like this happen,” said one of the employees at the center.

“When we catch a person putting up an ad on a telephone pole or something, they have to pay a 50,000 won of penalty, but there is no law against scattering them in a public place.”